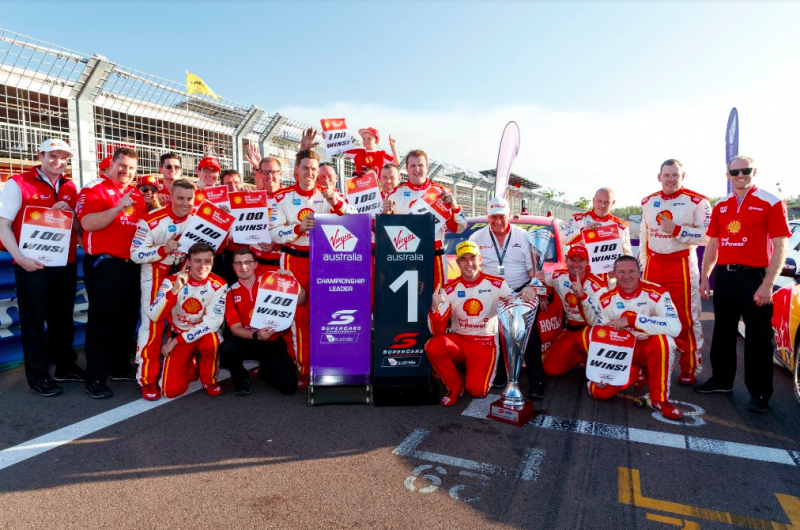 Scott McLaughlin says it was a special moment to score the 100th championship race win for the Dick Johnson Racing moniker following an impressive drive at Hidden Valley Raceway.

McLaughlin was able to preserve his tyres enough to ward off his rivals equipped with fresher rubber after electing to pit 13 and 15 laps before van Gisbergen and Reynolds respectively.

The victory proved to be a milestone moment with the triumph the 100th championship race win for the organisation which began as Dick Johnson Racing in 1981, before American giant Team Penske took a majority stake in 2015.

The squad is now the third Supercars outfit to score 100 wins behind Walkinshaw Andretti United (180) and Triple Eight with 175.

Team founder and five-time Australian touring car champion Dick Johnson was on hand to enjoy the feat on the podium.

“Being able to win the hundredth DJR win with the 17 car is pretty special and just pinching myself right at this point,” said McLaughlin.

“To have Dick up there was really cool.

“I felt like it was a fight. I mean, I knew that Shane and Dave were coming out on two or four tyres, or at least fresher tyres towards the end.

“We had sort of paced ourselves in the first part of that last stint after the pit stop just to look after the tyres just in case there was a charge or a Safety Car late, which is sort of what we always do.

“Obviously Shane was coming pretty fast and Ludo would sort of let me know to a point and then I started charging on bit by bit and then eventually he was right on my bum and we just pressed on as hard as I could.”

It was a feat that Johnson himself hailed a momentous occasion having guided the team through both the successes and the heartaches.

Another championship arrived in 2010 courtesy of James Courtney before a lean period hit the Queensland operation that almost saw it collapse.

It was saved by long time supporters Ryan Story and businessman Steve Brabeck, who sadly lost a battle with cancer earlier this year.

“It is (special),” Johnson told Speedcafe.com.

“I suppose when you’re as old as me, something’s got to happen; you’ve been around that long, doing the same thing.

“When you get things together, you end up with the right results, and we did today, so we’re looking forward to tomorrow now.”

Story, now managing director of the team, acknowledged the achievement as a big moment for the entire operation.

“Every single person in our team, for that matter everyone who has ever worked at DJR Team Penske and DJR over the years, buys into our culture and digs our ethos and Roger Penske’s ethos and it’s a big moment for all of us,” Story told Speedcafe.com.

McLaughlin’s win has helped the team open up a 69 point lead in the teams’ standings.