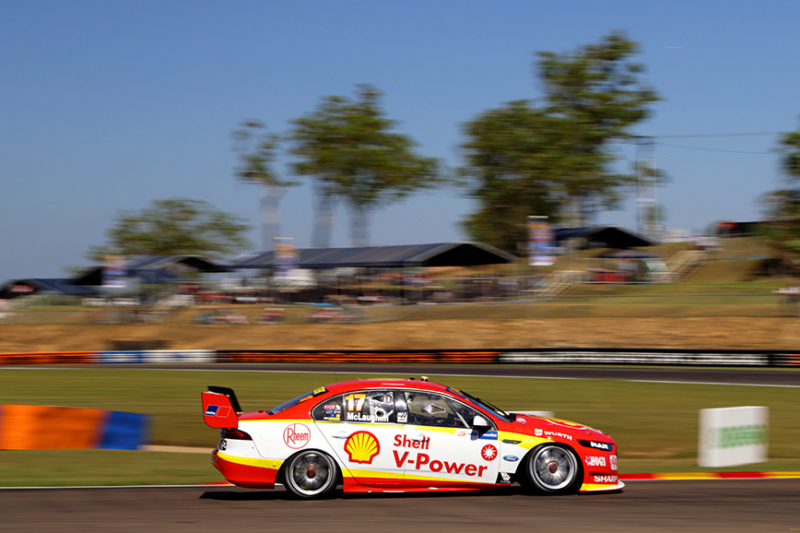 Scott McLaughlin has taken a narrow victory over Shane van Gisbergen after an intriguing strategy and on-track battle in Race 15 of the Supercars season at Hidden Valley.

The Kiwis ended up on the podium along with pole-sitter David Reynolds after van Gisbergen and Reynolds departed from the norm on strategy with later pit stops before coming home with superior pace.

Scott Pye and Garth Tander were notable movers as they finished fourth and fifth respectively.

Reynolds made a marginally better initial launch but beat fellow front-row starter McLaughlin to the first corner largely by virtue of having the inside line.

Behind, Rick Kelly ran third from Anton De Pasquale, and Jamie Whincup made a better start to move ahead of Red Bull HRT team-mate van Gisbergen into fifth.

Reynolds had a nervous moment when he locked the right-front wheel on the #9 Erebus Penrite ZB Commodore at Turn 1 on Lap 2.

He managed to stay on the track but let McLaughlin close right up to him until the championship leader dropped a wheel off at the other end of the circuit.

The front-runners began to take their compulsory pit stops at the end of Lap 5 when Kelly led Whincup and others into the lane, the latter of whom having been held up by De Pasquale.

McLaughlin took service a lap later and resumed ahead of Kelly, Whincup, Lowndes and De Pasquale, the Erebus rookie having followed the #17 Shell V-Power FGX Falcon into the pits.

They ran in that order as Reynolds and van Gisbergen continued to circulate at the very front of the field.

Van Gisbergen had whittled away Reynolds’ margin to around half a second before he took his CPS after 19 laps.

Reynolds’ was a perfect ‘even tyre’ strategy when he pitted after Lap 21 of 42 but he rejoined behind van Gisbergen, who had by then had got by De Pasquale.

By that stage, Kelly was holding up Whincup and Lowndes, with van Gisbergen and Reynolds closing.

Whincup attacked Kelly exiting Turn 1 on Lap 22 but got hung out wide by the time they got to Turn 5.

Kelly, too, ended up off the ideal line, bottling up that pack at which time van Gisbergen scythed past his Triple Eight team-mates and take up the chase behind the Nissan.

Van Gisbergen successfully pulled off the pass a lap later through Turn 2 and Reynolds too, who had also benefited from the Lap 22 squabble, was by shortly after.

The deficit to McLaughlin was then around five seconds, but van Gisbergen had reduced that to around half a second when #17 officially led for the first time at the completion of the CPS cycle with eight laps remaining.

Reynolds came with him but neither seriously threatened to advance any further.

McLaughlin ultimately took his sixth win of the 2018 Virgin Australian Supercars Championship by 0.42s, from van Gisbergen and Reynolds, and now leads the championship by 143 points.

“Thank you to everyone at Shell V-Power Racing, they gave me a fantastic car,” said McLaughlin.

“We took a punt there, obviously the other strategy was a bit faster, but they put a lot of belief in me to bring it home and thankful I did.

“We all know Shane’s a hard charger, (I) respect him like no other, and it was certainly great for me to hold him off and great for the team.

“I really wanted that win bad, to come back from the break and all that hard work behind the scenes.”

Pye, like Reynolds, pitted at exactly halfway but showed good late pace to pick off the likes of Whincup, Lowndes, and then Kelly on his way to fourth in the #25 Boost Mobile ZB Commodore.

Tander pitted with only 10 laps to go and set about scything his way to fifth, his best result since a podium in Race 2 of the season in the #33 Wilson Security ZB Commodore.

Neither Lowndes nor Whincup, however, could find a way past Kelly despite tailing him for over half the race.

De Pasquale ended up 11th in the #99 Erebus ZB Commodore and Cameron Waters (#6 Monster Energy FGX Falcon) was the first of the Tickford Fords in 12th.

Winterbottom appeared to have already run wide when he was sent spinning at Turn 2 on the second lap after a hit from team-mate Waters.

Waters had, however, cannoned into Car #5 due to being turned around by James Golding and the #34 GRM ZB Commodore was issued a 15-second penalty as a result.

The Sunday program for Supercars at the CrownBet Darwin Triple Crown begins with Armor All Qualifying for Race 16 at 0925 local time/0955 AEST.