Scott McLaughlin has continued to set the pace in a final Supercars practice session at Hidden Valley which was interrupted by a crash for Macauley Jones.

McLaughlin was fastest when the red flag interrupted proceedings just beyond the half-hour mark and improved during his final run when he stopped the clocks at a 1:06.1410s.

The #17 Shell V-Power FGX Falcon ended up 0.17s faster than next-best, who happened to be Jamie Whincup.

“There’s a little bit for me to work on just in regards to driving, couple of little differences that Fabian was taking at corners and stuff so I was sort of working on myself,” noted McLaughlin.

“We spent a lot of the session doing that; we did a couple little changes but we were happy yesterday, we didn’t want to overdo everything.

“I think, we’ve just done a couple little changes and it’s nice to experiment a little bit before quali.

“We’re not chasing anything we feel. We’re pretty happy at the moment.”

Whincup sat in the median of the 27-car field, 14th, ahead of the final runs before jumping up the order in the 43rd of 45 minutes.

His Triple Eight crew had made set-up changes to the front and rear end of the #1 Red Bull HRT ZB Commodore during the stoppage.

David Reynolds went second-fastest inside the first 10 minutes in the #9 Erebus Penrite ZB Commodore and remained there until being bumped by Whincup.

James Courtney moved to a time which would ultimately put the #25 Boost Mobile ZB Commodore fourth with just under 10 minutes to go, while Rick Kelly’s (#15 Castrol Nissan Altima) early effort held up for fifth.

Craig Lowndes spent much of the session just inside or outside the top 20 but lifted late to end the hit-out 10th in the #888 Autobarn ZB Commodore.

Scott Pye (#2 WAU ZB Commodore) was 11th while Tickford Racing’s best for the second session in a row was a 12th position, this time for Chaz Mostert (#55 Supercheap Auto FGX Falcon). 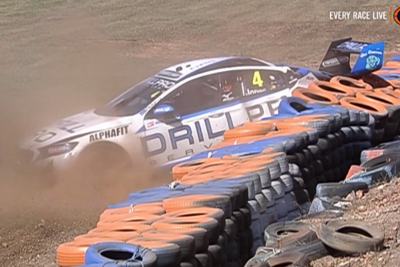 Macauley Jones was 13th when he lost the rear of the #4 DrillPro ZB Commodore and backed into the tyre wall at Turn 10.

The impact with the double-tyre-protected embankment creased the roof and left team owner Brad Jones uncertain if it would reappear for Armor All Qualifying in the early afternoon.

“We’ve got a reasonable spares package but it really depends on how badly damaged the chassis is,” he explained.

“I don’t think kinking the roof like that is a good omen but we’ll see what it’s like when it gets back.

“Hopefully we can get it sorted out, I don’t know if we’ll get it done for qualifying but if we can have him racing today that would be great.”

The wildcard driver ended up 21st once the session came to as close.

Lee Holdsworth was four positions further back having been hampered by an oil leak in the #18 Preston Hire ZB Commodore, with the source suspected to be the transaxle.