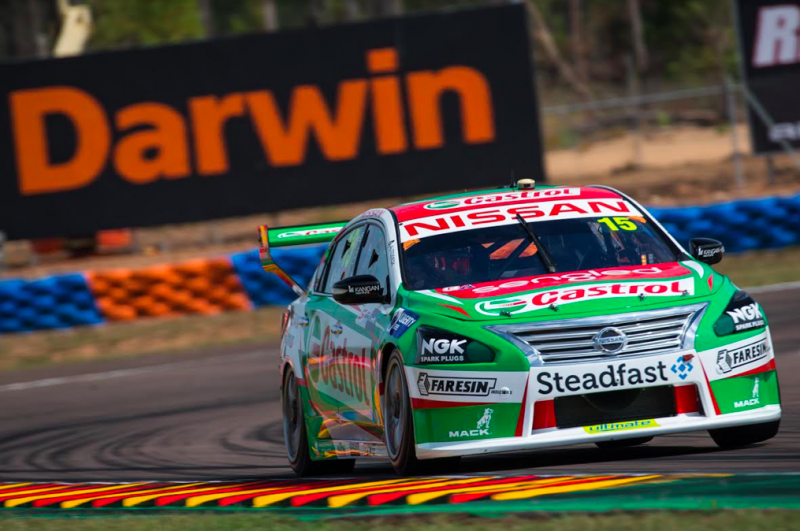 Rick Kelly was among the pacesetters in practice at Hidden Valley Raceway pic: AJP Photography

Rick Kelly believes his strong pace in Darwin practice is a result of Nissan Motorsport building on its growing momentum this season.

After scoring a breakthrough win last time out at Winton, the 2006 Supercars champion was fastest in Friday’s opening practice, before ending up second in the second 45 minute session at Hidden Valley Raceway.

Kelly adopted a different strategy of running his best tyres early in the session while others saved their rubber for later in the hit out.

The Nissan Motorsport co-owner has form at the venue having scored pole positions last year and in 2015, but on each occasion he was unable to convert the speed into a strong result.

However, with developments on the Altima yielding two podium finishes this year, he is hopeful the run of form can continue in Darwin.

The team enjoyed a productive test day at Winton last week analysing further potential improvements to its cars prior to the trek to the Northern Territory.

“The category moves a long way in 12 months so it was great to get that pole but this year we just want to focus on the momentum that we’ve had and try and get good race results on the Saturday and Sunday,” said Kelly.

“We’ve not really strung a whole weekend together at this place like we have recently at Winton and so on, so that’s the aim, we want to get through the weekend and get the results up there.

“But the pace, I think, this year is coming from the momentum we’ve had more so than what we did here last year.

“We tried a lot of stuff at the test day, which was good.

“Like everyone, it’s a great opportunity to throw some bigger items at it, but we’ve reverted to a set-up pretty close to where we were at Winton (SuperSprint).

“We’d be pretty silly to change it, and in previous years we’ve trickled along with the same car and it’s given us the same thing, nice and predictable.

“It was nice and predictable on Friday and we’ve got those things that we tried at Winton in the toolbox if we need them.”

Encouraged by his continued upwards trajectory of form, Kelly admits there are areas where his Altima is lacking compared to his rivals at Hidden Valley.

“I think it’s (the race pace) okay. It’s probably okay around three quarters of the track and there are a couple of corners that we need to focus on,” added Kelly.

“I felt at Winton, our pace as well was solid but it wasn’t the best with everyone out there so we need to chase a couple of tenths.

“We worked on that at the test day a little bit and we tried some stuff in those race runs just then to try and combat that, and I still think we’ve got a little bit of work to do.

“We hope that the outright pace is there, we’re not sure.

“If we are lucky enough to qualify up towards the front then we still need to just do a little bit more work on the race pace.”

The CrownBet Darwin Triple Crown continues today with final practice at 1050 local time, ahead of qualifying and a 42 lap race, scheduled for 1615.