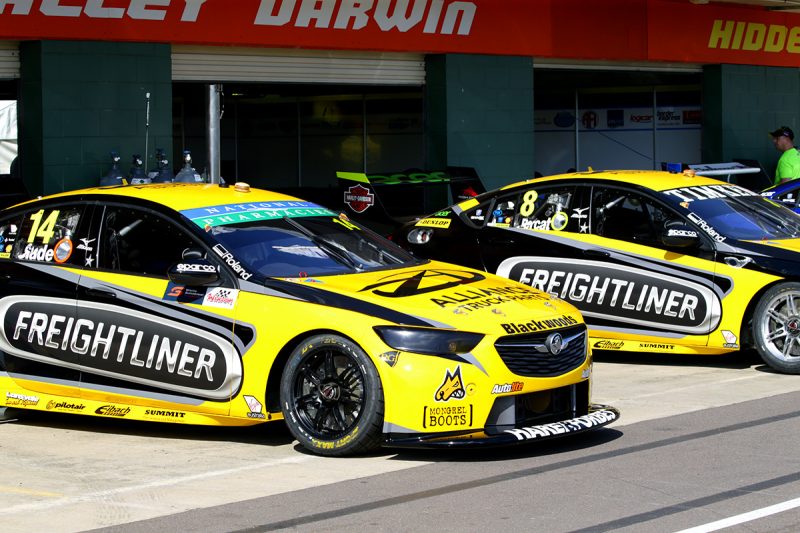 Brad Jones Racing expects Holden teams will be forced to continue to work around front splitter vibration issues at high speed circuits this season after the latest series of cases at the CrownBet Darwin Triple Crown.

The high speeds created by the long start-finish straight once again caused splitter flapping on several of the new Holden ZB Commodores during Friday practice at Hidden Valley Raceway.

It was most prevalent under braking for Turn 1, a section of track that appears to create the highest stress load on the component.

Teams were forced to tune car set-ups around the splitter to prevent the issue occurring, compromising front grip in the process.

The front splitter has proved an area of concern on the new Commodore this season with some teams forced to upgrade and strengthen the methods of attaching the part to the cars.

Incidents first came to light in pre-season testing before re-emerging at Phillip Island in April with Brad Jones Racing among those to encounter failures.

Today the squad experienced problems with Nick Percat’s and Tim Slade’s cars while the Red Bull Holden Racing Team displayed issues for the first time with its cars for Jamie Whincup and Shane van Gisbergen.

At one point the team was forced to replace the component on Whincup’s car. 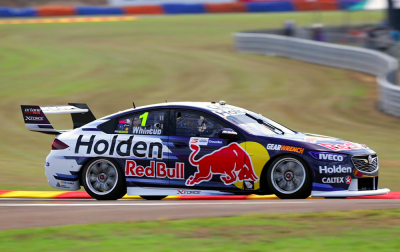 Jamie Whincup had to change his splitter during Practice 2

Homologation team Triple Eight and Garry Rogers Motorsport have constructed splitters for the ZB, the latter making the parts under licence from the factory Holden outfit.

Brad Jones says he isn’t surprised that the problem is still occurring at high speed tracks, but is reasonably confident that his squad has found a way to work around the situation.

Not all Holden teams have been affected with Erebus Motorsport among those who have avoided any issues this season.

“No,” Jones replied when asked by Speedcafe.com if he was surprised that teams are still battling the issue.

“It’s got a long nose on the car and I think it will be something teams battle with a lot, especially when we go somewhere like Bathurst.

“We had a lot with Nick and a little with Sladey so we’re going to do a bit of work on it tonight.

“I felt like we sorted Nick’s car out for the second session but we didn’t really get on top of Tim’s so it’s something that we’ll look into tonight. Ideally you won’t have any (flapping issues).

“I don’t think it’s a feature of the car but it’s something you have to deal with.

“We’ve made some changes in Nick’s car, I felt like we’re well on top of it, we’ve got a little bit of work to do on Timmy Slade’s car, but we’ll see what happens tonight.

“I’m as comfortable as you can be that we’re on top of it but it doesn’t take much for it to become a problem.”

Triple Eight team manager Mark Dutton has confirmed to Speedcafe.com that the problem with the component on Whincup’s car was not down to the part itself but due to a lack of bonding around the supports.

However, he admitted it is a concern that teams have to work around the issue at high speed circuits.

“That (Whincup’s splitter issue) was was just some bonding between the supports didn’t seem to be enough glue, “Dutton told Speedcafe.com.

“The parts themselves have not failed so there is nothing to be concerned about.

“We are not happy with that one but at least it seems to be an obvious reason.

“Always (the flapping suffered by cars is a concern) because of the extra speed we are going here.

“We haven’t been at these speeds for quite a while now so it was a good test and unfortunate that ours on car #1 didn’t pass the test but at least it wasn’t a fundamental issue with the design and something we that we need to massively react to, to sort.

“We will put that out of circulation and put one of our other ones on.”

The splitter issue aside, all three Triple Eight cars showed improvements in speed featuring in the top six in Practice 2.

Whincup was third, with Craig Lowndes fifth and van Gisbergen ended up sixth.