Alonso on pole for 24 Hours of Le Mans debut

Alonso on pole for 24 Hours of Le Mans debut 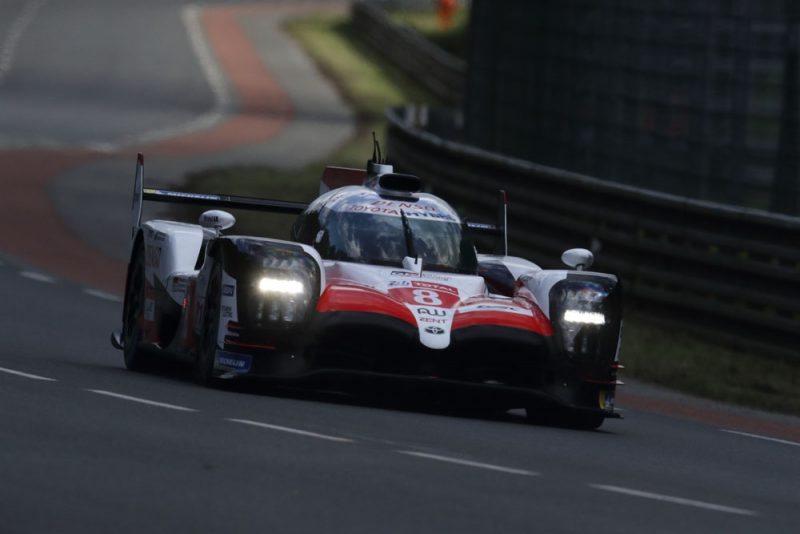 Sharing the #8 Toyota TS050, Alonso, Kazuki Nakajima, and Sebastien Buemi set the quickest time across the three qualifying sessions, their 3:15.377s a full two seconds faster than the sister car.

The lap was set by Nakajima, who’d set the provisional fastest time on Wednesday before improving on that effort in Qualifying 3.

Matt Campbell’s #77 Porsche 911 RSR lapped slower in the second qualifying session than it had on Wednesday, though none of the times bettered the 3:31.930s lap which put the Australian second on the LMGTE Am grid.

The car would however fall to third in class in Qualifying 3, as Ben Barker set a time that will see the #86 Gulf Racing Porsche he’s sharing with Alex Davison and Michael Wainwright second in class.

The Ford GT of Ryan Briscoe, Scott Dixon, and Richard Westbrook will line up seventh in class.

Having set the provisional fastest time in Wednesday’s session, Idec Sport improved in Qualifying 3 to confirm themselves of the LMP2 pole position, with Oreca 07 – Gibsons taking out the top four places in class.

Two qualifying sessions on Thursday night settled the grid after an intial session on Wednesday set a provisional order.

Qualifying 2, which started at 1900 local time, was marred by two of red flag interruptions, with a number of LMP2 and GTE entries leaving the road.

A ragged performance from Mike Conway also saw the #7 Toyota off the road an multiple occasions, though he was able to rejoin and carry on each time.

The session was ultimately called early when Girogio Sernagiotto crashed approaching the first chicane on the Mulsanne with a suspected front puncture.

Qualifying 3 then ran without incident, Nakajima banking the best lap of the weekend to confirm Wednesday’s provisional pole position.