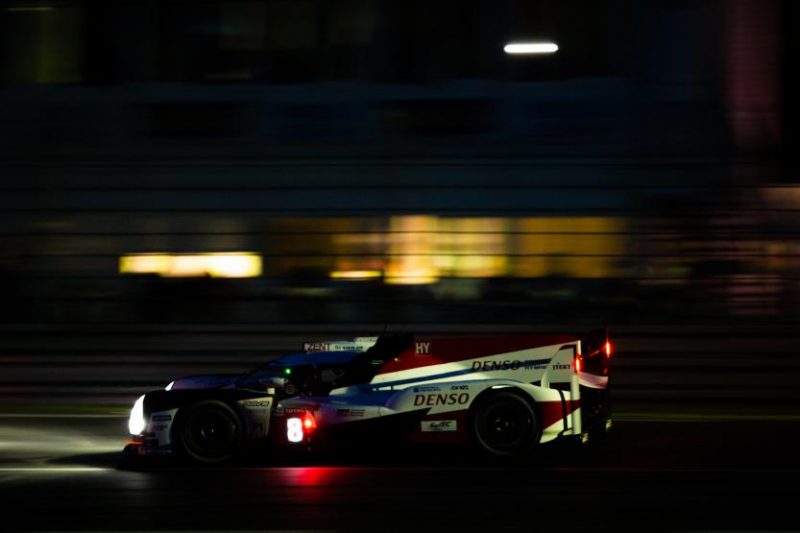 Toyota topped the timesheets at Circuit de la Sarthe as Porsche dominated the GTE classes ahead of this weekend’s 24 Hours of Le Mans.

It left the two manufacturer entries at the top of the time sheets, more than two seconds faster than the fastest privateer LMP1 SMP Racing entry in their BR Engineering BR1 – AER.

The two hour session started at 2200, Nakajima’s best time was set early before the car was handed over to Sebastien Buemi and Fernando Alonso so they could complete their required night time running ahead of the race itself.

Porsche then locked out the top two places in LMGTE Pro, and the first three places in GTE Am, including second and third for Australians Matt Campbell and Alex Davison respectively.

Campbell set the time that saw his Dempsey – Proton Racing Porsche 911 RSR second fastest in class, 1.2s off the team’s sister car which went fastest while the Gulf Racing entry in which Davison will compete was half a second further back, the time set by Ben Barker.

Behind the class leading Porsches in LMGTE Pro were two of the four Chip Ganassi Ford GTs, though the Scott Dixon, Ryan Briscoe, and Richard Westbrook entry was only 10th quickest in class.

Two further qualifying sessions follow on Thursday, the first at 1900 before Qualifying 3 at 2200.

Teams then have Friday free to prepare their cars ahead of a morning warm up on Saturday at 0900 prior to the race start at 1500.