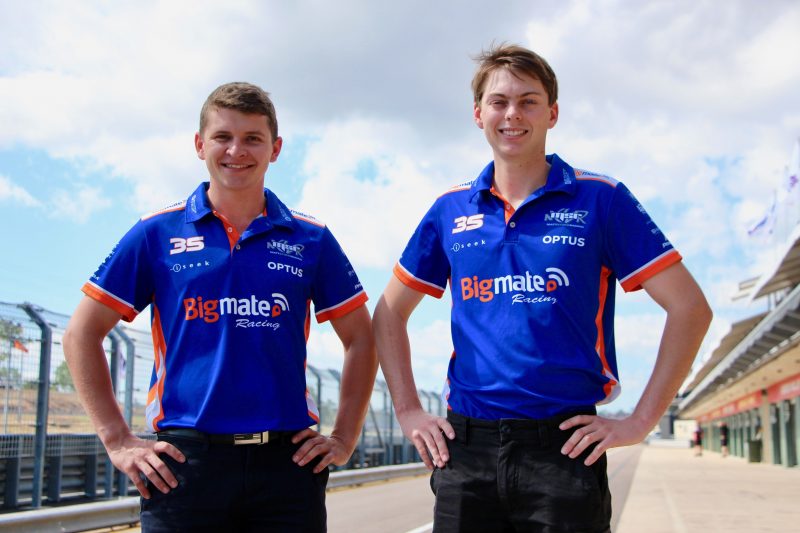 Bryce Fullwood has been confirmed to partner Todd Hazelwood in the Pirtek Enduro Cup for Matt Stone Racing.

The Darwin driver had been tipped to secure the last vacant enduro drive at the rookie Supercars squad after taking part in the Additional Driver session with the team at Winton last month.

Fullwood has been competing in the Dunlop Super2 Series since making his debut in the category with Paul Morris Motorsport in 2015.

The 20-year-old is currently 13th in the standings driving a Matt Stone Racing FGX Falcon similar to that of Hazelwood’s, which he will share at Sandown, Bathurst and Gold Coast Supercars events.

Speedcafe.com understands Fullwood was granted a Superlicence dispensation to take part in the session at Winton.

“I am extremely excited to make my debut along side Todd with Bigmate Racing, it will be a big step for me but I’m eager to see how I fair against the competition in Supercars,” said Fullwood, who will be racing in Aussie Racing Cars at this weekend’s CrownBet Darwin Triple Crown.

“I have grown up watching Bathurst and it has been my dream to racing in the event—so to know I’ll be starting in the big race this year is huge for me.

“My goal for the three races is to keep the car straight and put in a good performance for Todd and team. If I ensure I hit my marks, dot my I’s and cross my T’s, I don’t see why I can’t put in a performance that I’ll be pleased with.

“It’ll be huge for me and all of my family that has worked so hard to get me this far. This step is one closer to my dream of becoming a full time Supercars driver and I’m going to take it with both hands and give it my all.

“No-one from Darwin has gotten this far and I want to make sure I do everyone proud and hopefully it doesn’t stop here.”

Hazelwood believes Fullwood will prove to be a valuable co-driver given his experience in similar machinery this season.

“It’s great to have Bryce in the car for this year’s enduro season, I am very confident he will be able to do a great job behind the wheel, as his speed and ability to adapt was shown at Winton recently,” said Hazelwood.

“With Bryce competing in the Super2 Series in a chassis almost identical to mine, I know from my own experience how much this will help his transition and initial performance that will give us every chance of being successful at some of the biggest events of the year.

“One of the best aspects of this partnership is that we work together, live in the same house and race under the same team.

“It’s very rare to have a combination like that and hopefully the two young rookies will be able to create an upset when the enduros start.”

The announcement means veteran Jason Bright is likely to sit out the enduros unless a wildcard option becomes available.

Bright, who retired from full-time Supercars racing last year, had been linked to the drive at Matt Stone Racing with the operation leasing a Racing Entitlement Contract (REC) owned by the former to underpin the entry.

The Pirtek Enduro Cup begins with the Sandown 500 held from September 14-16.