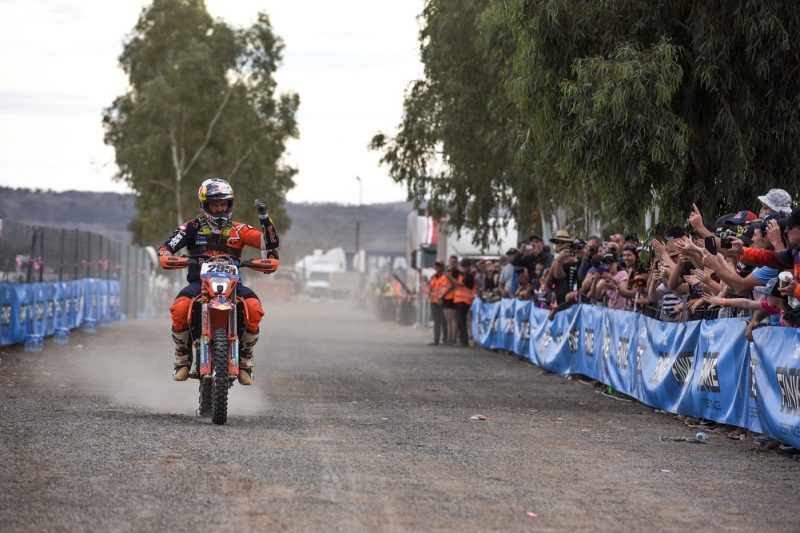 Toby Price is the King of the Desert on two wheels for the sixth time in nine years after winning the 2018 Tatts Finke Desert Race despite a fall on the way back.

The 2016 Dakar winner was the only rider to complete the 226km journey in less than two hours in each leg, with his return to Alice Springs around six seconds quicker than the departure at 1:57:39.5s.

Price had in fact gone down on the #295 KTM 500 EXC-F around halfway back to the Alice but still took victory by more than 10 minutes over David Walsh.

“2010 was a surprise and who would have thought we’d be here celebrating number six today?” said Price.

“I love coming back to Finke and playing in the red dirt, it’s always a good time.

“We’re pumped to have got another win. David made it pretty hard for us and we definitely had to push on the way home because from where David came from yesterday, I thought he was definitely going to push today.

“We tried to push hard but the track was brutal and we had an off at the 100km mark, which rattled us a little bit and scratched the helmet up. I’ve got a bit of a sore neck, but we’re here, we’re happy and I haven’t got a bad time so I can’t complain.”

Earlier, Price decided to sacrifice any chance of a Finke double in order to maximise his Bikes campaign.

The 30-year-old was second in Cars at the overnight stop but was hampered by power steering problems on the drive back up.

“Unfortunately we blew a power steering pump,” he explained.

“I’m a pretty big guy but it would have wrecked my bike race if I had tried to wheel the truck back, so we had to park the truck on the side of the track and chopper our way back to Finke and set out to try and win for the sixth time out here.”

Simpson was fourth at the overnight stop but went nearly three-and-a-half minutes faster on the return journey to consolidate third in his first Finke campaign.