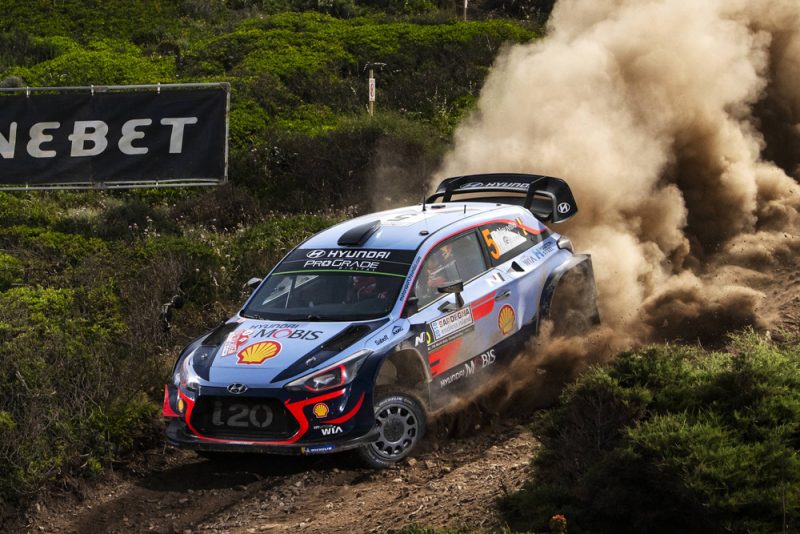 Theirry Neuville claimed victory in the Rally Italia Sardegna by less than a second over Sebastien Ogier in a thrilling battle that went to the final stage.

Neuville overturned that deficit through the 6.96km Power Stage to emerge victorious by 0.7s in one of the sport’s narrowest ever winning margins.

“We knew we had to give it everything we had this morning, and it was a truly fantastic fight with Sebastien,” Neuville said.

“The gap at the end was so small and we left absolutely nothing behind.

“We kept pushing as hard as we could without doing anything stupid. Battling against Seb is one of the most difficult things to do, so this is a precious victory.”

The Hyundai driver started the day by winning the opening three stages, before aggressive drives in the final stage saw both make mistakes.

In second, Ogier was handed an AUD$15,500 fine and a suspended points penalty after he departed the penultimate stage without his time card.

The errant time card was delivered to him by Toyota’s Ott Tanak, a move which officials deemed constituted ‘outside assistance’, though in their penalty acknowledged it was a “genuine human mistake without any deliberate cheating.”

Another infringement by the M-Sport crew throughout the season however will see Ogier stripped of the 22 points he scored in Sardinia.

Third home was Esapekka Lappi for Toyota, nearly two minutes off the back of the leading duo and a minute clear of Hayden Paddon in the second Hyundai.

Neuville’s advantage now stretches to 27 points in the drivers’ championship at the halfway mark.

The World Rally Championship next moves to Rally Finland on July 26-29 for the eighth round of the 2018 season.