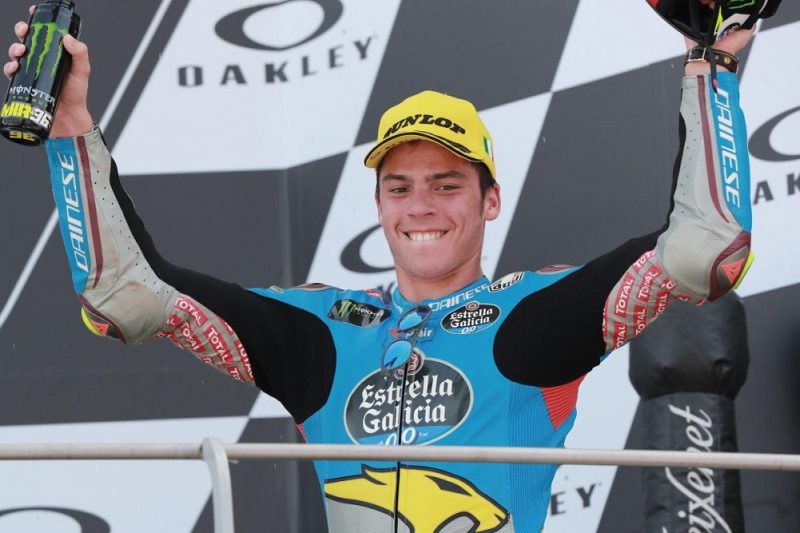 Next year’s factory MotoGP seats have all officially been filled with the announcement that 2017 Moto3 world champion Joan Mir will ride for Suzuki for the next two years.

Suzuki has confirmed paddock rumours that the 21-year-old Spaniard will step up from Moto2 into the premier class next season.

Mir is currently fifth in the intermediate class after winning 10 races and the title in Moto3 in 2017, the best lightweight class haul since Marc Marquez’s in 2010 (also 10 wins).

He will ride alongside 22-year-old Spaniard Alex Rins and takes the seat of Aprilia-bound Andrea Iannone.

“Of course, we know very well that he will need time to gain experience and grow with us, but we have full confidence in his potential.

“Suzuki management encouraged us to pursue the ‘young rider philosophy’ and with Joan I think we found the perfect protagonist for this role.

“With Alex and Joan we have two very talented riders and our target is to create a strong team for the future.”

Mir has two Moto2 podiums this season with Marc VDS, with the grand prix motorcycle season continuing in Barcelona this weekend (June 15-17).

Meanwhile in the Superbike World Championship, Jonathan Rea has signed on for two more years at the Kawasaki Racing Team.

The Brit has won the last three World SBK titles and became the outright most prolific race winner in championship history over the weekend but had been talks about a move to MotoGP, potentially at a factory team.

He leads the championship by more than a round’s worth of points, with Round 8 at Laguna Seca on June 22-24.