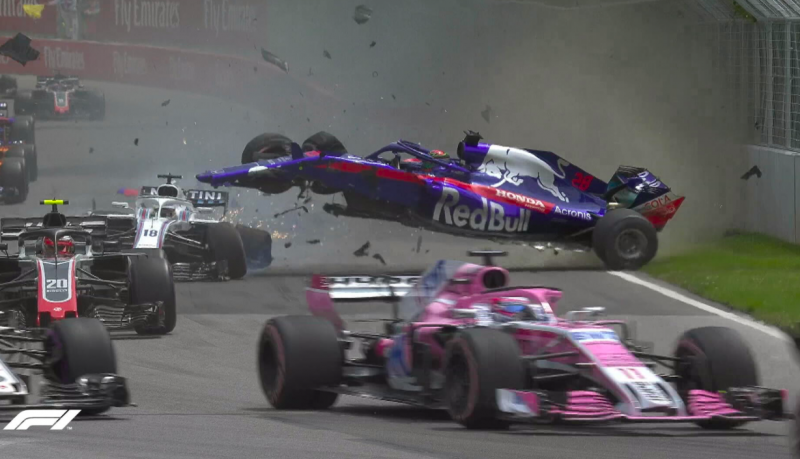 Brendon Hartley has been given the all clear by medical staff after undergoing precautionary scans in hospital following a spectacular opening lap retirement from the Canadian Grand Prix.

The under fire New Zealander tangled with Williams’ Lance Stroll on the exit of Turn 5 which put both drivers out of the race and prompted a Safety Car period.

Hartley found himself on the outside of a fast starting Stroll who momentarily slid wide at Turn 5 resulting in contact with the Toro Rosso that had started from 12th on the grid.

The clash saw forced Hartley to ride up the barriers briefly before being pitched across the road as both he and Stroll careered into the barriers at Turn 6.

Both drivers emerged from their cars unscathed although Hartley, who was seen walking in the paddock was transferred to a local hospital for a precautionary scan.

It has been reported the FIA has since confirmed the Kiwi was released without injury.

“I’m really disappointed for Toro Rosso and Honda, because we’ve been quite strong all weekend with a good update from the power unit,” said Hartley.

“I think we definitely had the pace to challenge for points today.

“I had a good start, similar to the drivers around me, but I got left a bit on the outside of Turn 2 which lost me a position.

“I got a good run on Lance out of Turn 4 on the outside, but he lost the car which put us both into the wall.

“It’s very disappointing as there was room to make the overtake, and I was looking forward to a strong race.

“It’s a frustrating way to end the Canadian Grand Prix as I’ve been really happy with my performance all weekend.

“I was delayed getting back to the circuit because I was flown to the hospital for precautionary checks. However, I’m definitely fit, healthy, and ready for the next race.”

Stroll admitted the crash was an unfortunate racing incident.

“I am really disappointed for the fans,” said the Canadian driver.

“I wanted to put on a good show for them.

“I had a good start, gained a few positions and got both McLarens, but I had some contact when I overtook them,” he reported.

“Then I was side by side with Brendon going into Turn 5. The car got loose on me, I corrected it but there was not much room for both of us.

“By the time I had corrected it we had touched.

“It is not ideal, but that is racing, things like that happen on the first lap as we are close and side by side, so that is how it goes sometimes.”

Stewards investigated the incident before deeming neither driver was at fault.