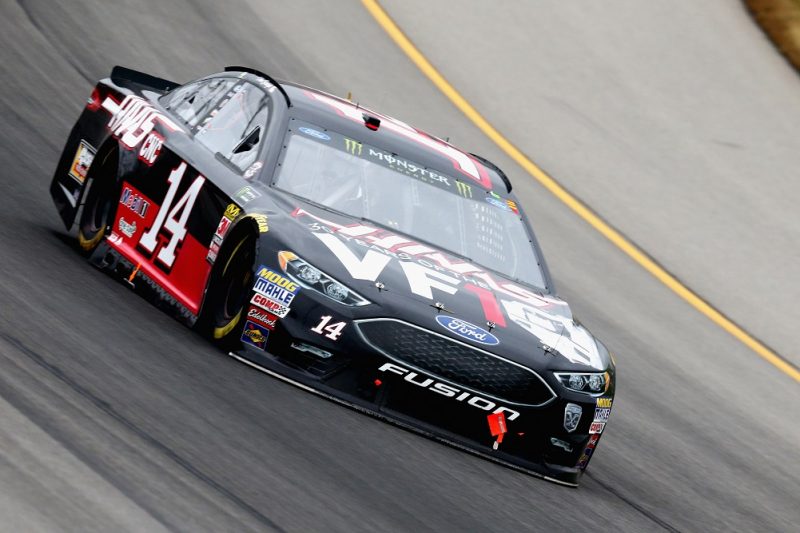 Clint Bowyer picked up his second win this NASCAR season in a FireKeepers Casino 400 which was cut significantly short by rain in Michigan.

Stewart-Haas Racing Fords were classified first, second, and third when the race was called after only 133 of the 200 scheduled laps.

Given that Stage 2 had been completed, the result of Bowyer in first, Kevin Harvick in second, and Kurt Busch in third stood.

The break at the end of Stage 2 and the start of the final stage proved to be the critical moments.

Harvick had won the second stage but was beaten out of pit lane again by Bowyer, who took only two new tyres compared to the former’s four.

When the green flag flew on Lap 126, Harvick got ahead on the low side but Bowyer drove past on the outside and put Car #14 ahead before they crossed the stripe again.

He managed to keep Car #4 behind until a Caution came on Lap 130 as a result of Ricky Stenhouse Jnr (#17 Roush Fenway Racing) spinning and hitting the wall at Turn 2.

Rain, which had already delayed race start by approximately two-and-a-half hours, began falling again while the yellow flags were out and the race was called then and there.

Harvick had earlier taken out Stage 2 after hitting the lead for the first time on Lap 72 of the race and heading a majority of laps during the second stanza in Car #4.

That stage also ended with an SHR top three, Bowyer a little under three seconds adrift in second and Kurt Busch third in Car #41.

SHR narrowly missed out on a quadruple top 10 as Aric Almirola was classified 11th in the #10 Ford.

Kyle Larson fell a lap down during Stage 2 when he spun the #42 Chip Ganassi Racing Chevrolet at Turn 4.

He got the lap back with a free pass at the final Caution, but with no time to mount a recovery was classified 28th.

Kyle Busch continues to lead the Monster Energy NASCAR Cup Series, which takes a rare weekend off before the Toyota/Save Mart 350 at Sonoma Raceway on June 22-24 (local time).