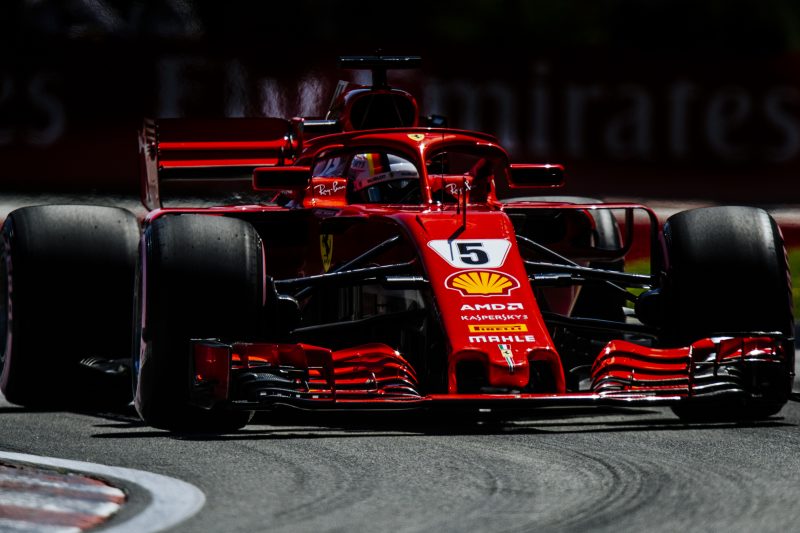 The Ferrari driver jumped to the top of the times after his first run on the hypersofts in Q3 and was able to shave 0.012s from the benchmark with his final effort to secure a 54th career pole.

“The car was incredible in qualifying, it just kept getting quicker,” said Vettel.

“My final lap I had a small mistake otherwise I think there was a little bit more.”

Red Bull’s Max Verstappen impressed to snatch third with his final lap of the session to end up 0.173s adrift of the pace.

The Dutchman had topped the times in all three practice sessions heading into qualifying.

“I’m very happy with this weekend so far, the car’s been working really well,” said Verstappen.

“We’re just missing top speed. To be third is great for us and in the race I think we can do a really good job.”

Lewis Hamilton could only manage fourth in the second Mercedes having appeared to lose time through lock ups at the hairpin on his flying laps.

Kimi Raikkonen will start from fifth as a mistake at Turn 2 saw the Finn slide from third spot after the first run in Q3.

Both Red Bulls will however start to the race on the hypersoft tyres while Ferrari and Mercedes drivers will utilise the ultrasofts.

“It is the tail end of the top six so on paper it is not that satisfying,” said Ricciardo.

“It feels like we have made some progress in qualifying as we have struggled pretty much all weekend, we struggled for some rhythm.

“We had some issues yesterday and this morning we struggled in practice with some other issues, so I feel like we have always been one step back.

“I felt like the laps were worth more than sixth place. I feel like I didn’t do a bad job.”

Renault’s Nico Hulkenberg was the best of the rest in seventh ahead of Esteban Ocon (Force India), while the top 10 was completed by Carlos Sainz (Renault) and Sergio Perez (Force India).

Kevin Magnussen just missed out on the top 10 in 11th for Haas F1 ahead of an improving Brendon Hartley, who out-qualified his Toro Rosso team-mate Pierre Gasly.

It was the New Zealander’s second best grid berth of the season.

Sauber’s Charles Leclerc took 13th ahead of the McLaren duo of Fernando Alonso and Stoffel Vandoorne, who were half a second shy of securing a spot in Q3.

Gasly made a surprise early exit in Q1 after he was pipped to a spot in Q2 by the two McLarens.

The pair fared marginally better than Sauber’s Marcus Ericsson who damaged his car after contact with the wall at Turn 9 early in Q1.

As a result, he will start from 19th alongside the Haas F1 of Romain Grosjean.

The Frenchman failed to post a time having been wheeled back into the garage after plumes of smoke poured from the rear of his car while trying to exit the pits.

The Canadian Grand Prix is scheduled to start at 0400 AEST on Monday morning.