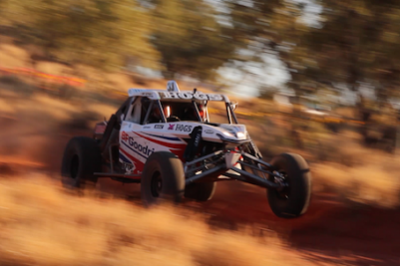 Toby Price has a solid lead in the Bikes field and is second to Shannon/Ian Rentsch in Cars after the outbound leg of the 2018 Tatts Finke Desert Race.

Shannon and Ian Rentsch have given themselves the best possible chance of defending their Cars title for a fifth occasion with the fastest time on the 226km journey down to Finke.

The Victorian father and son pairing were first out by virtue of winning the Prologue and set a quick time of 1:47:57.7s in their #33 Jimco Aussie Special Nissan 3500cc.

“We had a pretty good clean run, no real trouble,” said Shannon Rentsch.

“The car handled pretty well, doesn’t seem like we’ve got any issues at the moment.”

Their truck ended up a little worse for wear but Price was satisfied with a competitive showing in his non-referred discipline.

“Really stoked to arrive in Finke second, just a few minutes from the leader after a wild ride down in the Red Bull trophy truck,” he said Price.

“We had a couple of close calls and managed to rip the tracker off the roof, but I’m looking forward to starting second off the line tomorrow.”

Greg Gartner/Jamie Jennings/Mark Hannaford (#410 Geiser Bros Ford Raptor TT Ford 6000cc) sit third, having been passed by Price around the 170km mark after blowing a tyre in the whoops.

“We were just trying to get down to Finke and looking after ourselves pretty well and we were in some whoops sitting around 180 or 190km/h and the left rear tyre blew so that upset our day,” explained Gartner, the 2011 Finke winner.

“We had to change that and then that upset the back of car a little bit so we struggled a bit to get here that’s for sure.”

Beau Robinson and Shane Hutt (#413 Geiser Bros TT Chev 6000cc) were second-fastest in the Prologue but did not make Finke due to mechanical issues.

The Acciona 100% EcoPowered, piloted by Andrea Peterhansel and Emma Clair, was also a DNF. 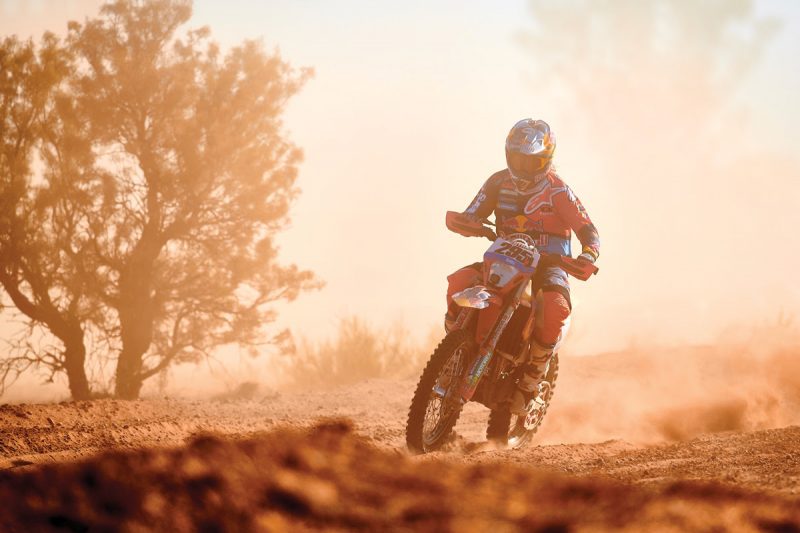 Price flew back to Alice Springs after his drive in the trophy truck to hop aboard the #295 KTM 500 EXC-F and ride to Finke, and now has a healthy lead in the two-wheel classification.

Last year’s runner-up Ivan Long (#2 Husqvarna FE 450) was second away but did reach Finke, with a mechanical failure believed to be the reason.

The Cars will leave Finke at 0715 ACST with first vehicle due back at Alice Springs around 0905.

Bikes set off again at 1145, the first expected into the Alice at approximately 1405.