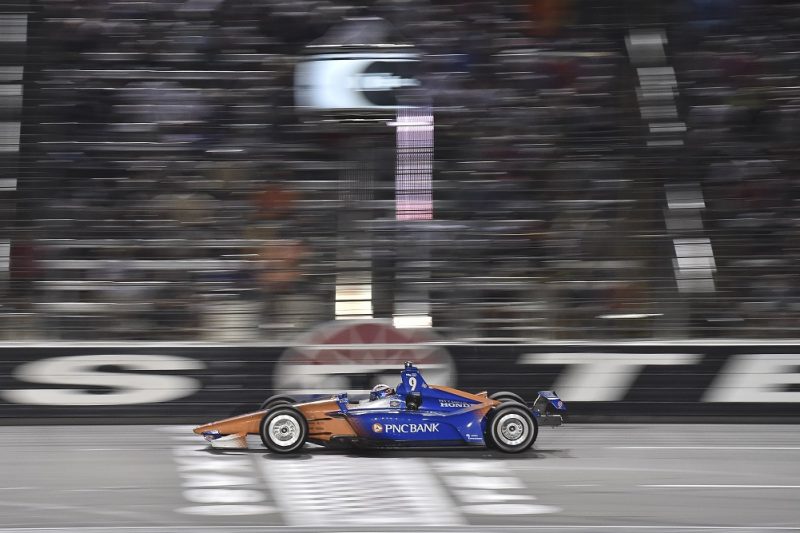 Scott Dixon leads the IndyCar Series with a second win in three races in the Texas 600 while Will Power crashed out after a tangle with Zachary Claman DeMelo.

Dixon effectively led the second half of the DXC Technology 600 and drove away from the field in the final 33-lap green flag run, while Simon Pagenaud staved off a vigorous challenge from Alexander Rossi as they completed the podium.

The #9 Chip Ganassi Honda started seventh and Dixon made slight inroads on-track to emerge fifth at the completion of the first pit stop cycle, 71 laps into the 248-lapper.

He moved into a podium position in passing Power on Lap 98 as the Team Penske trio battled blistering tyres and seemed to be attempting to save fuel.

Dixon got by Simon Pagenaud to run second on Lap 114 and jumped Robert Wickens (#6 Schmidt Peterson Honda) through the second pit stop cycle, during which Car #9 took to the lane after Lap 123.

The New Zealander increased his margin to over seven seconds on Lap 150 as Wickens got held up by traffic and then passed by Rossi.

Dixon’s advantage grew to around 13 seconds by the time the second Caution period of the race came on Lap 173 when Wickens and Ed Carpenter crashed at Turn 3.

He maintained top spot off pit lane and through the next green flag stint, which came to an end when Power and DeMelo tangled on Lap 205, then drove away at what was the final restart to win by 4.29s.

The victory is the 37-year-old’s 43rd in IndyCar, moving him to third outright all-time.

Pagenaud started second but looked to have a battle on his hands with tyre life in particular.

The Frenchman passed team-mate Josef Newgarden shortly after their respective first pit stops to lead the race, but ceded it to Wickens on Lap 95.

The #22 Team Penske Chevrolet had dropped to sixth by the time the second stint was done, rebounded to be third under the second Caution period, and shot past James Hinchcliffe moments after the restart.

The key battle in the latter laps was that for second between Pagenaud and Rossi, who started eighth and also had a refuelling issue during the second Caution but clawed back track position with some brave driving.

Try as he might, Rossi couldn’t get past Pagenaud at the end and brought the #27 Andretti Autosport Honda home in third.

Newgarden took pole and led the entire first stint but suffered the worst from blistering right-hand-side tyres, which took the #1 Team Penske Chevrolet off-sequence just before the 100-lap mark.

The 2017 champion went on to finish 13th, having never really recovered from the tyre problems and also copped a drive-through for jumping the final restart.

The other Penske driver fared even worse, Power officially classified 18th after he tangled with Claman DeMelo and took both Car #12 and the #19 Dale Coyne Racing Honda in the wall.

Power had been sitting behind Hunter-Reay and began to drift high just as DeMelo got a good run in the top lane, the Australian moving across the Canadian’s nose.

Wickens’ race ended on Lap 172 when he tried to lap Carpenter (#20 Ed Carpenter Racing Chevrolet) at Turn 3 but was squeezed on the apron, the contact causing both cars to spin up the race track.

Both Carpenter and Power accepted the blame for their respective incidents, the latter explaining that he could not hear his spotter due to being given an instruction from strategist Roger Penske at the time.

Matheus Leist brought about the first Caution of the race on Lap 7 when his #4 AJ Foyt Racing Chevrolet caught fire.

Leist pulled off the track and was quickly out of his vehicle.

Dixon’s win puts him on top of the table with a 23-point gap to Rossi, while Power drops from first to third.

The Verizon IndyCar Series field has a weekend off before the Kohler Grand Prix at Road America on June 22-24.