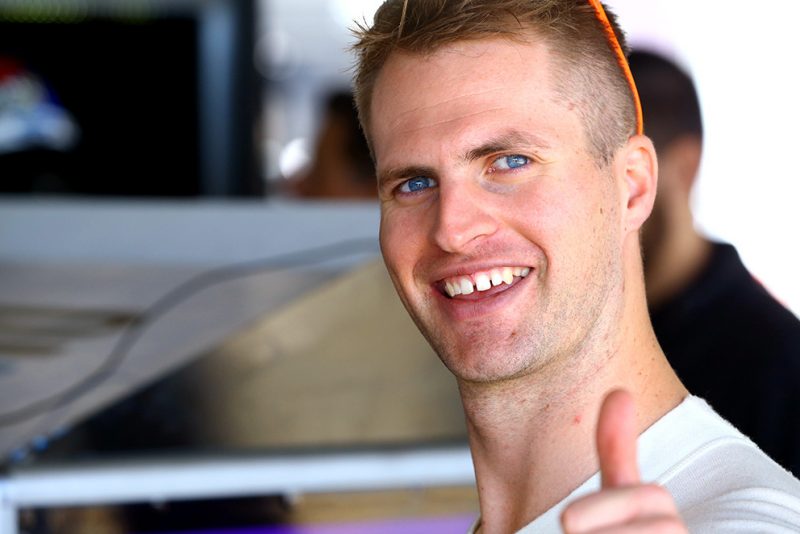 After a tough 2017 season, Super2 racer Garry Jacobson moved teams for this season and has recaptured the mojo which saw him claim the championship in 2016.

But there’s more to Jacobson than just what happens at the track.

Aside from being an aspiring Supercars main game driver, he also drives a bus in the family business and, as he told Speedcafe.com’s Mat Coch, he’s heavily involved with his local community around Sheparton.

SPEEDCAFE: Firstly, let’s talk briefly about your Super 2 season. Not everything has gone your way but you’ve still had some really strong results. What does that mean for you longer term, and potential main game opportunities?

GARRY JACOBSON: It’s never a guarantee anymore no matter how good you’re going at Super2, you need a lot of other things to align to be someone that’s on the front foot to get into a team the following year.

So this year has been fantastic racing with Mathew White in the Nissan Altima.

We’ve been able to achieve, out of the three tracks we’ve been to, we’ve actually broken two of those lap records.

SPEEDCAFE: You’re stepping into a race winning car when we get to the Pirtek Enduro Cup, that must be a nice feeling?

JACOBSON: Yeah, for me I competed that first time last year as a rookie co-driver, I’ve never done it before.

I guess what I presented last year was good enough to obviously have a chance to talk to other teams over the summer about which co-driver opportunities I could get into considering I hadn’t got to main game.

Instead of only having one option, opportunity, I had sort of four presented to me in terms of who I was going to drive with and I was really keen to drive with Nissan and Rick Kelly because not knowing him very well behind the scenes they looked like an incredibly driven team.

SPEEDCAFE: You’ve got a little bit of a break before you get to Townsville with Super2, are you going to be looking at doing wildcards?

JACOBSON: I definitely want to compete as a wildcard entry, I’ve wanted that since I won the championship in 2016, almost in 2017 and I’ve been trying my best to get that much needed funding that I need to use in order to compete consistently in the Super2 championship but also that extra money that I’d need to find to go and race as a wildcard.

At this stage I haven’t got anything locked in to compete as a wildcard entry because I haven’t got the funding yet but, certainly if there is an opportunity, like I’ll just keep knocking on doors and trying to apply for more sponsorship from now til then for those extra opportunities.

SPEEDCAFE: During the week we saw your name crop up alongside Mark Winterbottom’s doing some charity work, can you tell us about that?

JACOBSON: We’ve just come off a really successful event called GV Brain where I did a guest speaking event.

We were raising, targeting to raise money for charity. So myself and Mark Winterbottom were asked to do the event and then also donate towards an auction some of our championship winning racing gloves and photo frames and things like that.

So plenty of that sort of stuff that I’ll be doing for my local community in Shepparton, and yeah just continuing on with my bus driving duties as well. So yeah just staying busy basically.

SPEEDCAFE: Did you expect to be able to use your profile for that sort of thing?

JACOBSON: I didn’t honestly expect to be able give back this early on in my career or in my life.

I’m still quite young and I would have thought to give back to your community or to raise that amount of money for charity you’d have to be, you know, a very famous main game driver.

I’ve just found the last couple of years the things I can do; give back to the young Goulburn Valley Car Club Association some experience to these young kids that’s aspire to be Formula Ford drivers soon, and little things like bringing attention to my local town about what racing can provide for careers that go TAFE.

There’s so many career choices that people make and motor sport is probably one of the most well known sports for probably not the highest amount of pay, but also known for the amount of hours that it takes to be involved.

SPEEDCAFE: Motorsport can be a tough game off the track as well as on, can’t it?

JACOBSON: Generally people are in it for the love of it and I probably had my first learning of what it really is like to be involved in a motor sport team when I turned 18, the day I sort of finished my year 12 exam I moved straight to Bayswater North in Melbourne and worked for Michael Ritter.

There were some days when I worked for Michael Ritter where we didn’t necessarily have 12 hours of work there ready to be done but he was just making sure that I was there during the long hours to really see whether I wanted to be a genuine race car driver.

After those two years I guess you’d call working with Sonic was my sort of, I guess you’d say it was my kind of university, for motor sport, while still trying to maintain a racing career.

It was great, it was hard work but just made me more understand that motor sport is what I want to do for a long time to come.