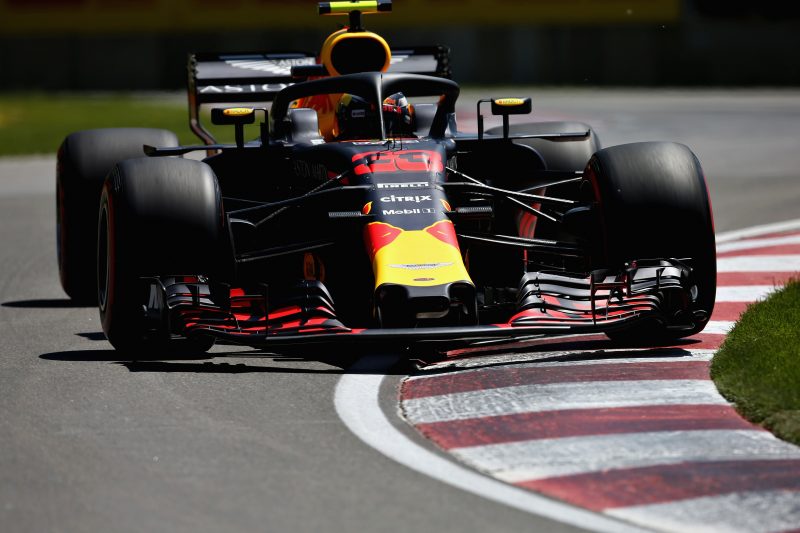 Max Verstappen topped both sessions to set the pace in the Friday practice for the Canadian Grand Prix.

The Red Bull driver proved the class of the field as the Milton Keynes outfit once again showed their pace on the hypersoft compound tyres at Montreal’s Circuit Gilles Villeneuve.

After heading the timesheet in Practice 1, the Dutchman, who is under pressure to perform, impressed to improve to a 1:12.198s by the chequered flag in the second 90 minute session.

Ferrari’s Kimi Raikkonen emerged as his nearest rival just over a tenth slower than Verstappen on the same hypersoft compound rubber.

It proved to be an eventful day for Monaco Grand Prix winner Daniel Ricciardo, who spent long periods in the garage with an electrical issue after logging four laps early in Practice 2.

When he re-emerged late in the piece the Australian was able to post a time good enough for third, some 0.4s adrift of his team-mate.

Ricciardo is among the six Renault runners to receive the latest engine upgrades from the French manufacturer.

“It (the problem) was not related to the MGU-K, there was some electrical stuff going on,” said Ricciardo when asked about the engine issue.

“It was not the best day. We are ok, Max was able to show some pace, so there is a bit to learn.

“Mercedes are going to be quick tomorrow for sure and I would say they are the ones to beat at the moment.”

Mercedes elected not to use the softest hypersoft tyres throughout the day as they looked to keep their powder dry until final practice and qualifying.

Romain Grosjean (Haas F1) was the best of the rest in seventh with the top 10 completed by Esteban Ocon (Force India), Sergio Perez (Force India) and McLaren’s Fernando Alonso.

Alonso’s team-mate Stoffel Vandoorne saw his day end prematurely when he hit the wall at the Turn 6-7 chicane just shy of the hour mark in Practice 2.

The Belgian damaged the right suspension on his car which prompted a Virtual Safety Car period.

He wasn’t the only driver to find the wall as Renault’s Carlos Sainz backed into the barriers at Turn 7 after losing control upon entry to the corner earlier in the session.

The crash halted the running while debris was cleared by the marshals.

Williams’ struggles continued as the squad propped up the times with drivers Lance Stroll and Sergey Sirotkin.

The former found the infamous ‘Wall of Champions’ in the first session in front of his home crowd.

Qualifying for the Canadian Grand Prix is scheduled for Sunday at 0400 AEST.