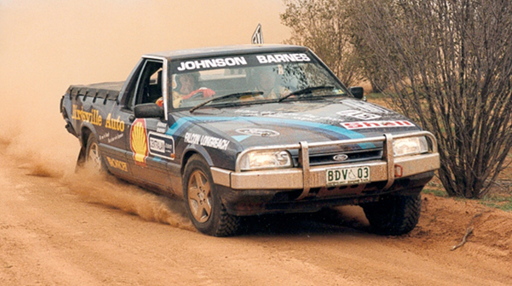 Dick Johnson’s Australian Touring Car exploits are the stuff of legend, and his stints in NASCAR and European Touring Cars a known quantity, but his time at Finke is less widely remembered.

Action in the Tatts Finke Desert Race begins today with the prologue around Alice Springs, but 25 years ago Johnson was there for his second of two attempts at Australia’s blue riband offroad race.

The three-time Bathurst 1000 winner was a DNF in his first attempt in a Ford F150, but managed to finish in the top 10 when he returned in 1993 to campaign a barely modified Falcon ute.

“It’s probably one of the best events you go and do, it’s a ripper thing to do, it’s an awful lot of fun, and it’s a real challenge,” Johnson told Speedcafe.com.

‘Finke’ is a two day there-and-back rally between Alice Springs and the small Aboriginal community of Aputula, also known as Finke after the normally dry river nearby.

The 226km route (each way) takes in some of the service road for the alignment of the old railway line to Alice Springs, is typically dusty, and features the infamous whoops.

“It was (interesting),” Johnson confirmed.

“The whoopsie-doos, about 30 kilometres of ups and downs where the bikes go over them on the back wheel and this is all in sandy s**t and she was a ride and a half, I can tell you.

“I probably needed a kidney belt but we didn’t have any.

Finke was too rugged for the F150 in 1991, but when Johnson came back two years later when he had a service station owner by the name of Allan Barnes as co-driver, and found more success with the Falcon.

“It’s a pretty tough event. I know the F150, it broke the shock absorbers off the back and it was like a bloody pogo stick,” recounted Johnson.

“I had to ratchet strap the diff in and we made it down to Finke and it was pretty exciting stuff.

“We finished I think sixth outright in our class or something in a Falcon ute, which was pretty good I thought.”

The 1993 campaign was not without its challenges, however. According to Johnson, the Falcon’s modifications were little more than a slight increase in ride height.

On the dusty track between the Alice and Finke, it showed.

“It was not far from being just a bog-standard ute,” Johnson explained.

“The only problem we had with the ute was that because of all the dust and the way the standard air cleaner was set up, it used to fill the standard air filter up with dust to the point where you’d have to stop, get out, take the air cleaner out, beat it out along the side of a wheel to get all the dust out of it, put it back in, and away you’d go again, because it used to slow the thing down to buggery.”

The Queenslander was hardly a rally driver whose efforts were simply missed among his achievements in a touring car, Johnson revealing that his only other offroad experience was two starts in the 2GO Gosford Rally on the Central Coast of New South Wales.

He says that the most challenging aspect of Finke, however, was the mechanical sympathy required to make the distance.

“I think it’s just driving conservatively to make sure that the vehicle made it because it’s pretty tough on vehicles,” said Johnson.

“It’s down beside the old Ghan railway line and things like that, and it goes through the Finke River.

“To get across it is a real effort because it’s like driving on the soft sand on the beach in a two-wheel-drive car, which was reasonably difficult.”

When asked how to negotiate the river, Johnson replied, “You just go like hell across there!”

The now 73-year-old says that he had an offer to do Finke again, but had a clashing commitment. He still takes an interest and will be keenly waiting to see how the 2018 edition plays out.

“When I see the edited version of the footage they have from it, it’s something that I always look forward to seeing,” Johnson confirmed.

“They get some great shots of vehicles in different parts of the whole track and for me there are parts of the track that I can remember vividly.”

The current crop of competitors, 131 Cars and 614 on Bikes, will complete their prologues in Alice Springs today when there will be a special tribute for the late Daymon Stokie, 2017 Bikes champion.

Toby Price, meanwhile, will again attempt to become the King of the Desert on both two wheels and four.

The southbound journey to Finke takes place tomorrow (Cars from 0715 ACST, Bikes from 1145 ACST) with the return on the Queen’s Birthday Monday.