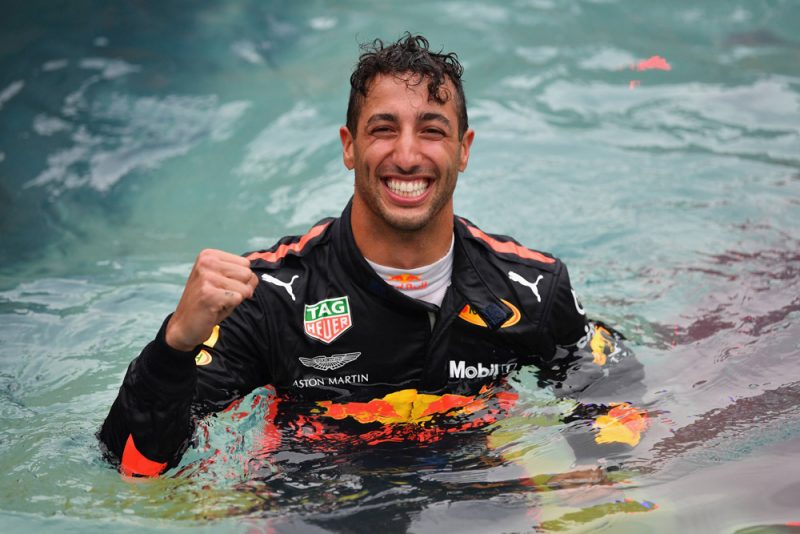 The Australian survived an MGU-K failure early in the race to head Sebastian Vettel and Lewis Hamilton to the flag in a drive Alan Jones touted as one of the best ever on the Monaco streets.

However, Ricciardo admits his performance in the race, coupled with the longer than usual build up to the weekend, left him with no energy left to celebrate.

“Monaco is always a long week, there’s a lot going on outside of the car, and with practice starting on Thursday there instead of Friday like it does everywhere else, it does take a lot out of you,” Ricciardo wrote in his Red Bull column.

“For me, only Melbourne compares because of the commitments we have, and you add that to the fact it’s in your adopted home as well and there’s so many people around, your energy levels start to run empty.

“Some of that was self-inflicted, to be fair, because I’d put a lot of pressure on myself all week this year to try to win it. Once I did that, I was gassed.

“The reality of the Sunday celebrations was that they were pretty tame,” he continued.

“The whole thing was a whirlwind. After the race, I did my media commitments before walking back onto the Red Bull Energy Station.

“It was like the Queen had arrived, I got this massive ovation, and then it was straight up to the pool and the photos and video up there that you’ve seen.

“I had to then run down to my drivers’ room to have a shower to get out of my race suit so I didn’t catch pneumonia, the pool water was freezing!

“Did two TV interviews, and then I had to go off to this gala dinner with Monaco’s royalty.

“Got a boat back to my apartment, my Mum was already there getting my suit out and ready for me. I stayed at the dinner until 12.30am, then got back home.

“I was tired, my mates who were in town for the race had already gone out, but I didn’t have the energy to do the same.

“So – I’m not joking – had a beer in bed and tried to run through the day in my mind and what had happened. Glamourous, huh?”

The 28-year-old did have time on Monday following the race to celebrate with friends, who’d flown in from Australia and Europe for the weekend, before travelling to the US, where he’s spent time training in Los Angeles ahead of the the Canadian Grand Prix this weekend.

It’s a circuit that saw the Red Bull driver claim his first grand prix win in 2014, and leaves him with high hopes again this year.

However, Ricciardo is likely to face a tough ask in Montreal with the prospect of a grid penalty looming after the team confirmed he will have to undergo an MGU-K change.

“Canada means good memories for me of course with my first win back in ’14, seems like a long time ago now,” Ricciardo said.

“Strangely enough it hasn’t been a track where I’ve done all that well, I had that win and a third last year, and not a whole lot else.

“But Montreal is a cool city for us to go to and I like the track, it’s a bit old-school and you have to be able to attack those chicanes and use the kerbs.

“Of all the places we go to, it’s a bit like Melbourne – semi-permanent street circuit in a public park, the city is close, there’s water, the fans are always there in big numbers and early in the day because there’s always other categories on track … feels a bit like my home race.

“There’s nothing like going to the next race weekend when you’ve just won, and I know there’s a lot of chat about whether I’m a genuine title contender now I’ve won two out of the first six races. We’ll have to see about that,” he added.

“If I get another one or two before the mid-season break, then maybe that’s the answer.”

With two wins to his name in 2018, Ricciardo sits third in the drivers’ championship with 72 points, 38 points behind title leader Hamilton.