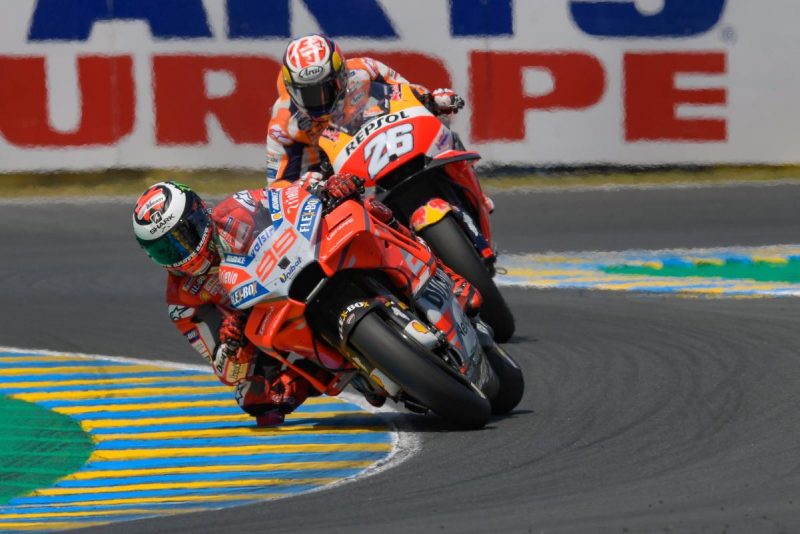 Jorge Lorenzo is set to take over the now vacant seat at the Repsol Honda MotoGP team next year.

Multiple reports from Europe are now predicting that the Spaniard, who has already made clear that he will leave Ducati, will replace Dani Pedrosa.

Pedrosa’s impending exit from the factory Honda team after 13 years was announced overnight.

Lorenzo had originally been pencilled in to ride for a new Yamaha satellite team owned by Sepang International Circuit, which already runs in Moto2 and Moto3.

It is believed that Danilo Petrucci will be promoted from satellite Ducati outfit Pramac to the works team alongside the recently renewed Andrea Dovizioso.

Lorenzo’s and Petrucci’s moves all but guarantee that Jack Miller, who had also been linked to Repsol Honda, will stay at Pramac.

The Australian would, however, be given the latest-spec Desmosedici GP19 next year when he would be joined by the already confirmed signing Francesco Bagnaia.

Pramac currently runs Petrucci on a GP18 and Miller on a GP17.

The pairing of Marquez and Lorenzo, who won onboard a Ducati for the first time last weekend, would make for a powerful combination.

In only one of the preceding eight seasons has another rider won the MotoGP world championship, namely Casey Stoner in 2011 when he too was a Repsol Honda rider.

Lorenzo won his first premier class title in 2010, his second in 2012, and has been the only man to deny Marquez in the past five years when he bagged a third in 2015.

Movistar Yamaha, whom Lorenzo rode for on each of those occasions, is likely to be the only factory team which will take an unchanged rider line-up into 2019.

Maverick Viñales and Valentino Rossi have both inked new two-year deals to stay at Yamaha, the latter of whom will be nearly 41 years old by the end of that period.

There is less certainty at Aprilia where Aleix Espargaro will stay but Scott Redding looks set to be dumped, perhaps making way for Suzuki discard Andrea Iannone.