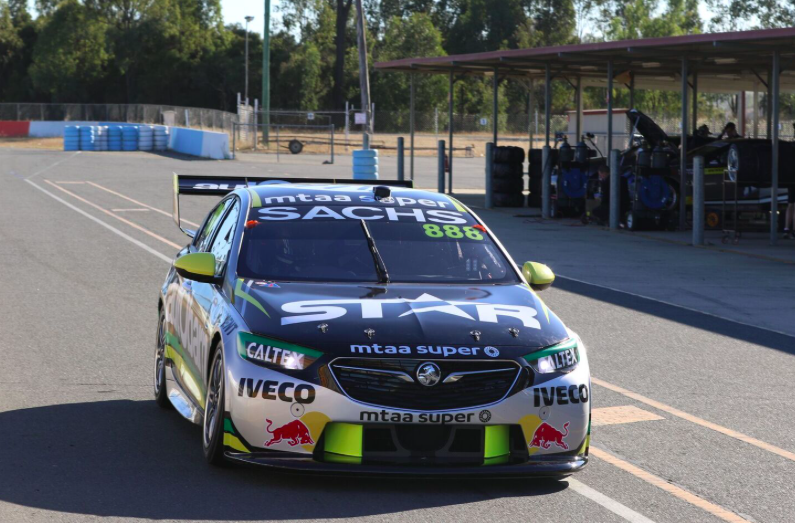 Craig Lowndes was left encouraged by the progress made on his ZB Commodore after finding gains from trying old set-up principles previously discarded by Triple Eight.

Lowndes joined team-mates Jamie Whincup and Shane van Gisbergen for the operation’s first in-season test at Queensland Raceway which proved to be a hugely productive day.

The Brisbane squad managed to complete an extensive list of items and set-ups to test in bid to further understand the new ZB Commodore aero package, which has endured an inconsistent start to the season.

However, Lowndes believes a program of testing set-ups that have previously not gelled with the ZB’s predecessor, the VF Commodore, provided gains to be analysed and exploited.

“I think it was something we needed. Most of us are encouraged with what we’ve learned,” said Lowndes.

“All three cars ran different programs. As a collective team, we decided to do that, rather than all of us trying the same thing and just trying to fast-track our understanding.

“Whether we can use that at other tracks is another thing, but we’ve learnt a lot about the car and different set-ups.

“Like Burke and Wills (famous explorers), we went over all our old stuff as well, and found a lot of gains in old stuff that we’d put in the basket of ‘been there, done that’. We learned a lot.

“We’re encouraged by things that we’ve been trialling and trying to get onto the car, and also old geometry that we hadn’t worried about because it hadn’t worked on the previous Commodore, but this one works differently.

“But what works here at QR may not work in Darwin or at other places. We’ve got to take it for what it is.

“We know how the car will respond when we do things that way, so depending on what we need from the car at different tracks, at least we’ve got a toolkit to work off.”

According to Lowndes, the four-time Bathurst 1000 winner described the car as the ‘best’ he’d driven at the venue in recent years.

“Richo did two 30 lap race runs. He got out of the car and said it was the nicest car he’s driven around here in a long time,” Lowndes said of Richards’ run in the car.

“It’s good signs for us. Really Richo was all about getting miles. He hadn’t driven the car because he didn’t get to do the co-drivers’ run at Winton.

“He came out with glowing comments about where we’re at with the car.

“We still need to find some pace, we’re not sitting still, but he’s comfortable, which is great.”

Switching his focus toward the next championship round at Darwin, Lowndes, who is third in the standings, is feeling optimistic about his chances for success.

“Hopefully it should be good. It’ll be low-drag again, obviously that long straight, we need to get our straightline handling down pat,” added Lowndes.

The CrownBet Darwin Triple Crown is scheduled for June 15-17.