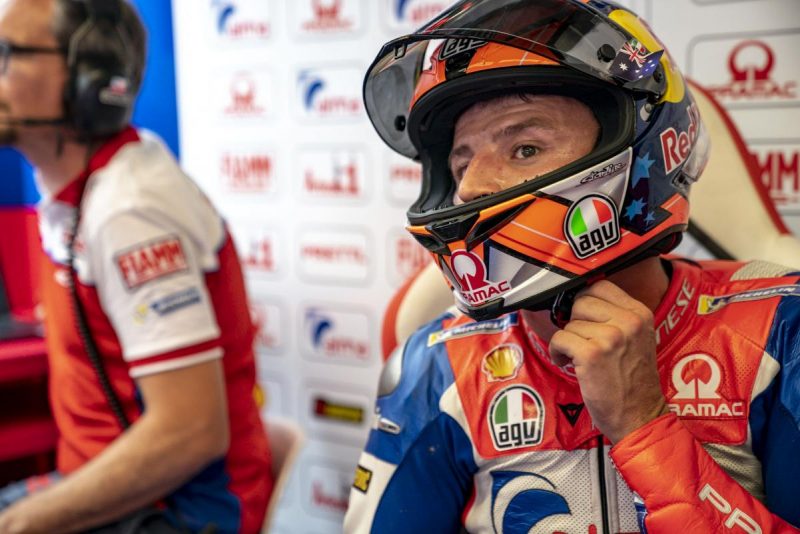 Jack Miller has refuted a report that he declined an offer to join the factory Repsol Honda MotoGP team next year.

Miller only left Honda at the end of 2017 after his HRC contract was effectively transferred to LCR Honda rider Cal Crutchlow.

The Townsville native switched from Marc VDS to the Pramac Ducati team, where he currently pilots a year-old Desmosedici GP17.

While recent reports have suggested that Miller could replace Jorge Lorenzo at the factory Ducati Team in 2019 or, failing that, at least be handed a GP19 at Pramac, a new option emerged over the Italian Grand Prix weekend.

Spanish sports newspaper AS claimed that Honda was willing to meet the one million Euro buyout clause needed to pry Miller away from Ducati,

The report also claimed, however, that Miller had declined to leave Ducati and join Marc Marquez at Honda’s works team.

The 23-year-old signed a one-year deal to ride for the Italian marque, which has an option to re-sign Miller expiring in June.

“I haven’t turned down anything,” said Miller when the AS report was put to him.

Upon being asked if he would turn down Honda, he responded, “Repsol Honda? I’d have to think about it. Depends…”

Johann Zarco and Andrea Dovizioso were also linked to Repsol Honda before the former opted to move to the factory Red Bull KTM team and the latter to stay at the Ducati Team.

World Superbikes leader and back-to-back-to-back defending champion Jonathan Rea has also thrown his hat into the ring in the hope of replacing Dani Pedrosa.

Meanwhile, Miller has put his crash at Mugello down to an issue with front suspension on his Ducati.

The Australian went down on the second lap and did not remount, ending a streak of eight top 10 finishes dating back to last year.

“I just went into Turn 4, quite calm, but right at the wrong point hit the bottom of the fork and she just went down,” said Miller.

“Since the Thailand test we found out that we have a problem with the bottoming.

“We normally we add a bit of pre-load and drop the front to have the same position, but we didn’t do that for here. We didn’t feel it was necessary. But it is what is it.

“It sucks but these are the moments that make the other ones better.

“It’s nothing new to me, I’ve had plenty of crash outs before. But this is the year we can make mistakes, let’s say, because next year I want to be fighting for that title and this will mean a lot more.

“We’re learning, making steps, we’re in the right way. It’s just a minor setback. Not the end of the world. Still 13 rounds to go. We’ll have a few more opportunities I’m sure.”

With that failure to score points, Miller dropped from sixth to ninth in the championship ahead of Round 7 in Catalunya on June 15-17.