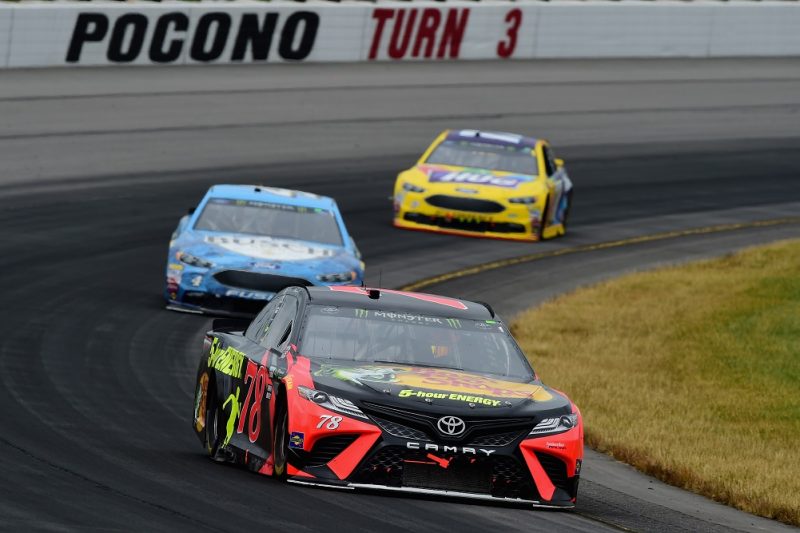 Martin Truex Jnr fought back from a slow mid-race pit stop to notch up his second win of the year in the Monster Energy NASCAR Cup Series at Pocono.

Truex Jnr, Kevin Harvick, and Kyle Busch all seriously contended for the win but it was the #78 Furniture Row Racing Toyota that was on top when it mattered.

Kyle Larson in fact finished second in the #42 Chip Ganassi Racing Chevrolet, 2.50s behind the 2017 champion, and Kyle Busch rounded out the podium in the #18 Joe Gibbs Racing Toyota.

Ryan Blaney started from pole in the #12 Team Penske Ford and led until he was passed by Harvick on Lap 12.

But for pit stops, Harvick held top spot until he was baulked by traffic six laps from the end of Stage 1.

The moment allowed Truex Jnr got a run on the #4 Stewart-Haas Racing Ford and drive past on the outside.

While that move was decisive in the opening stage outcome, Truex Jnr was only 14th out of pit lane under yellow after an error during his stop.

Brad Keselowski headed the field at the restart in the #2 Team Penske Ford but was soon picked off by Harvick.

Car #4 continued to hold the effective lead and ultimately took out Stage 2 by 2.79s from Kyle Busch, as Truex Jnr climbed back to fourth.

Kyle Busch quickly moved into second position, one ahead of Larson, but Truex Jnr was back in the podium positions when Derrike Cope (#99 StarCom Racing Chevrolet) spun and drew the first unscheduled Caution on Lap 126.

The front-runners all pitted, after which Kyle Busch led Harvick, Blaney, Truex Jnr, and Larson.

Truex Jnr moved up to second at the restart and inherited first position when he stayed out at as a Caution was called for debris on Lap 139. Kyle Busch resumed in eighth with four new tyres.

Kyle Busch passed Harvick in the latter laps as Truex Jnr staved off Larson before pulling away at the end.

The result nevertheless saw Harvick rise above Logano to second in the series and also draw level with leader Kyle Busch on playoff points.

Round 15 is the FireKeepers Casino 400 at Michigan International Speedway on June 8-10 (local time).