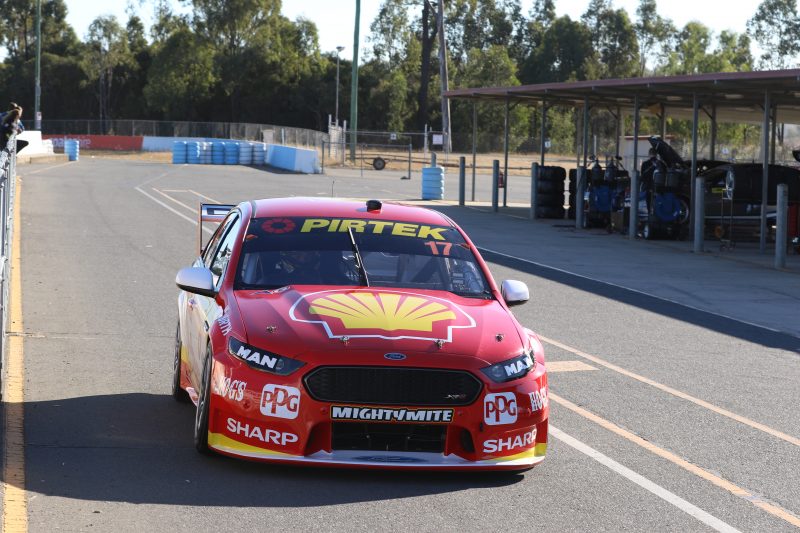 Queensland Supercars teams will descend on Ipswich today for a ‘critical’ test day as they go in search of valuable performance gains for the second half of the season.

Reigning teams’ champions Shell V-Power Racing, the Red Bull Holden Racing Team, Autobarn Lowndes Racing, Tekno Autosports and Matt Stone Racing will all be in action at Queensland Raceway for what will be their first test miles since pre-season.

With testing limited to three days, the outing is a hugely important opportunity to try new developments and further understand current packages following a hectic start to the 2018 campaign.

Shell V-Power Racing heads into the test in strong form after taking out five of the last six races with its drivers Scott McLaughlin and Fabian Coulthard.

The former, who has enjoyed a brief trip to the US in the break since Winton, leads the championship standings by a 131 points from Shane van Gisbergen, while Coulthard scored a breakthrough win last time out.

Hoping to maintain their advantage, the Shell Fords will trial some new developments at Ipswich, according to managing director Ryan Story.

“We have got a number of developments to try but it is a test where we are focussing on consolidation given the compressed nature of the start of the season,” Story told Speedcafe.com.

“It is a good opportunity for us to try out a few new things and new ideas and see where we are.”

Rivals Triple Eight have struggled for consistency with its new ZB Commodore that burst on the scene with victories at Adelaide, Albert Park and Symmons Plains.

While van Gisbergen has kept a steady stream of podiums flowing since, the operation is eager to unearth more from its new look package to challenge DJR Team Penske.

The team’s primary drivers Jamie Whincup, van Gisbergen and Craig Lowndes will be joined by the latter’s co-driver Steven Richards, who is expected to log laps.

“There is stuff we have got to get through,” team manager Mark Dutton told Speedcafe.com.

“Every test is critical but this one in particular because we have now had a few rounds under the belt with the new ZB Commodore and we have found some of its strengths and possible weaknesses.

“Sometimes you have to reevaluate the validity of your tuning tools that possibly gave great rewards on the VF but not as rewarding on the ZB, so you do have to check your toolkit.

“There are some new ideas because we do like to keep developing to move forward, but in the same sense you have to use some of the old tricks.

“There are still the same fundamentals of the race car.

“We have worked hard to have a few fresh ideas and new directions as well as trying to get that base set-up.”

For Supercars rookie Jack Le Brocq, the test is a chance to tune up areas of his own driving style.

The Tekno Autosports driver switched from left to right foot braking at Symmons Plains and is continuing to adjust to the change.

Le Brocq is currently the top rookie in the standings lying in 18th spot after the first six rounds of the season.

“It (the test) should be quite good as it has been a pretty full on start to the year,” Le Brocq told Speedcafe.com.

“There are a few things I need to tune up with braking still and there are quite a few questions about the way I drive the car, and little bits and pieces regarding set-up, to try and get the car to suit my driving style.

“Hopefully we can get a lot out of the day, it will be a bit full on for us.

“We want to understand our current package a bit more. It is more about how it all works.”

Meanwhile, fellow rookie Todd Hazelwood is desperate for an opportunity to find gains from his Matt Stone Racing Falcon after a difficult start to life in the main game.

The reigning Super2 Series winner is lying 23rd in the standings having recorded a best finish of 18th from the 14 races.

“I’m really looking forward to hitting the reset button with this car and start to clarify some issues we currently have,” said Hazelwood.

“It’s hard to take the positives out of a weekend like Winton, but we will keep pushing and Darwin will be a lot greater for us.”

The test begins a hectic week of on track action for Supercars teams with Tickford Racing, Nissan Motorsport, Garry Rogers Motorsport and Erebus Motorsport set to log laps at Winton on Tuesday.