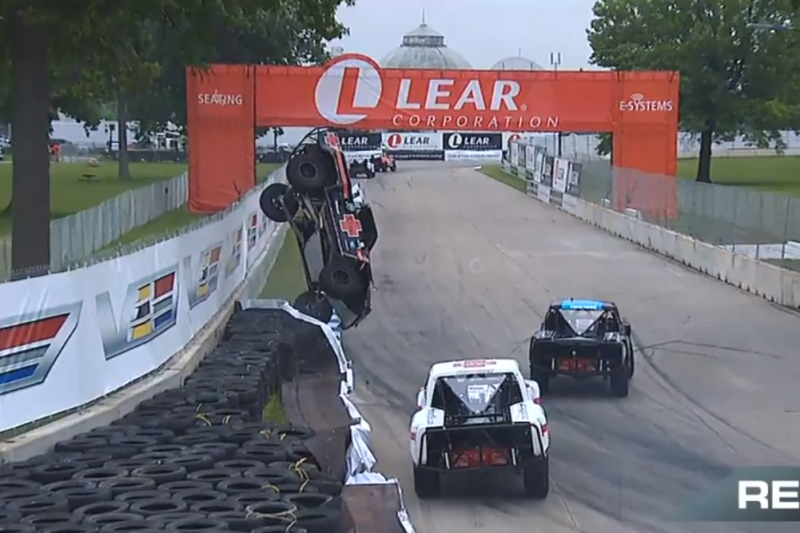 Paul Morris had to crawl from the cabin of his Stadium Super Truck after a spectacular crash on the streets of Detroit.

The Australian was running third in the second race of the weekend with four laps to go, but slid wide at Turn 3 and hit the tyre wall.

Morris’ truck launched vertically into the air, eventually ending up on its roof before the defending series winner pulled himself from the wreckage and into the hands of safety crews. 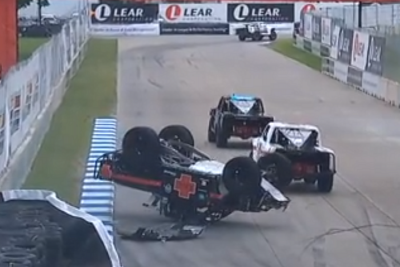 Morris’ truck came to rest on its roof

The incident brought out a red flag and an early end to proceedings leaving Arie Luyendyk Jnr to take the Race 2 victory.

Matthew Brabham finished second with Gavin Harlien rounding out the podium after winning Race 1 earlier in the weekend.

Aaron Bambach, who filled in for an absent Robby Gordon, cleared off at the start in Race 1 and opened up a commanding lead.

The field closed back up under the Competition Caution, before a secondary yellow flag intervention came less than a lap after the restart when Cole Potts endured a rollover.

Morris found himself in the lead, but when the second restart came, he struggled to get going and plummeted down the order.

Harlien therefore inherited the top spot and crossed the line first ahead of Bambach and Luyendyk Jnr at the chequered flag.

In Race 2, Morris snatched the lead early from Potts who was shuffled back from the reverse grid pole.

Jeff Hoffman quickly charged his way into second before running up the Turn 3 escape road along with leader Morris, which demoted the latter to third.

This left Luyendyk Jnr in the lead out front as Brabham slotted his way into second on the Competition Caution restart.

Morris’ crash marked the end of proceedings as the race was called with four laps remaining.

Brabham’s second place result in the final hit-out means that he retains the series lead at the conclusion of Round 5.

Stadium Super Trucks now heads to Texas Motor Speedway for its next round from June 8-9.