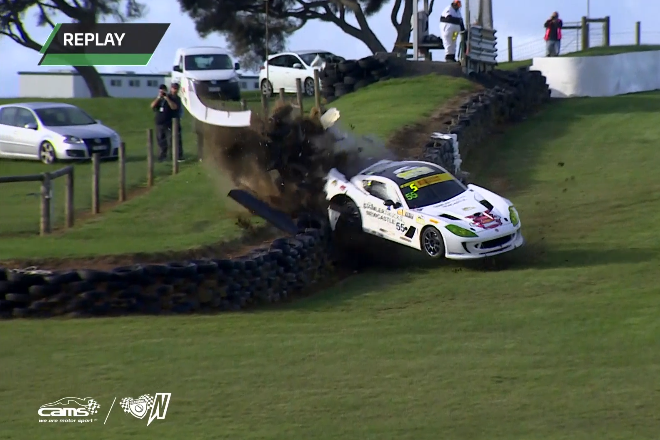 Action was halted for a first time due to a sizeable crash for Rio Nugara on lap 49 at Lukey Heights.

The impact flung the Ginetta into the air and tore off its left-rear wheel, while flames were also seen coming from the rear.

Nugara, who swept the two Australian GT Trophy Series races a day earlier, stepped out of the car under his own power.

It is not known whether or not the crash was caused by a mechanical failure, with Nugara appearing to not be able to turn properly at the left-hander.

The #911 Walkinshaw GT3 Porsche 911 GT3 R of Liam Talbot and John Martin was a lap down in eighth but in a favourable position being one pit stop up on the other contenders.

Martin drove the first stint and led by more than 36 seconds before he handed over to Talbot at the end of Lap 17.

Talbot lost some of that lead in the pits and then on track but was still comfortably clear of then-nearest rival Duvashen Padayachee.

Padayachee, who is driving the #58 YNA Autosport McLaren 650S with Shane van Gisbergen, made side-to-side contact with Ash Samadi as he attempted to lap the #3 Audi R8 LMS at MG corner.

The clash broke the McLaren’s steering wheel and the Audi’s steering.

McElrea Racing, which runs the YNA car, has borrowed a steering wheel from the already retired Tony Quinn 650S but Car #58 is three laps down. 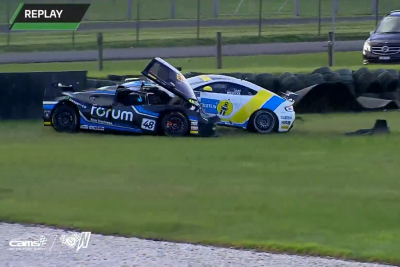 Fraser Ross held the lead in another McLaren, which he is driving with Jaxon Evans.

The race resumed following a delay of more than 30 minutes but action was short-lived as another crash forced officials to deploy the Safety Car and then the red flag to suspend the encounter for a second time on lap 55.

The #48 KTM X-Bow, driven by Vince Tesoriero, ran wide and lost control at Turn 1 which resulted in the car spearing across the track and hard into the tyre wall.

To make matters worse Jeremy Gray also lost control at the same area of the circuit moments later, with his Aston Martin Vantage GT4 clattering into the stricken Tesoriero.

Both drivers emerged form their vehicles as the field parked up on the pit straight while marshals fixed the tyre wall.