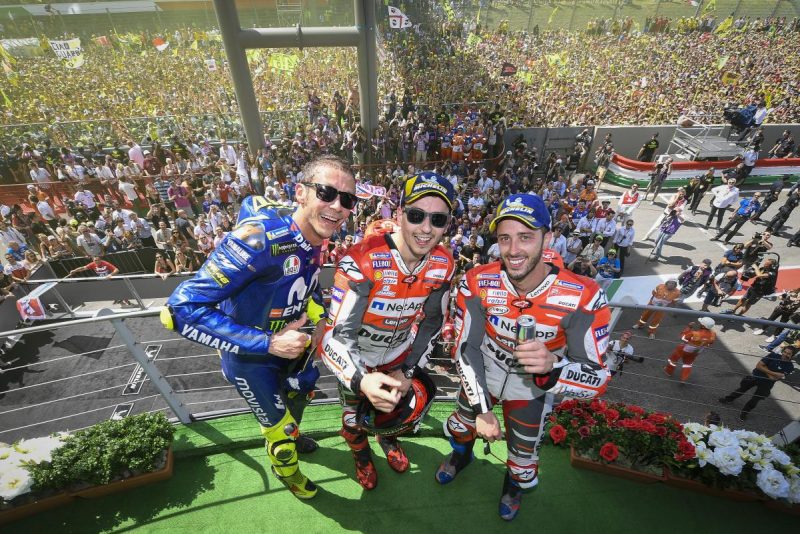 Jorge Lorenzo has broken through for his first win for Ducati as the Bologna factory went one-two in Mugello and Italian riders finished second through fourth.

Lorenzo led from start to finish, pulling away from team-mate Andrea Dovizioso despite #04 looking threatening in taking over second position on Lap 7 of 23.

MotoGP world championship leader Marc Marquez crashed early on as Valentino Rossi moved into second in the title race having held off Andrea Iannone for the final podium position.

Lorenzo again headed the field into the first corner, this time from the middle of the front row, as Marquez was ultra-aggressive just behind.

The #93 Repsol Honda sat sixth on the grid but Marquez went deep under brakes at San Donato, ran wide, then forced Danilo Petrucci well wide into the next corner as he attempted to recover.

Petrucci dropped as far back as 10th as Lorenzo led pole-sitter Rossi, Marquez, Iannone, Dovizioso, and Alex Rins at the end of the first sector.

Marquez passed Rossi at the end of the main straight on Lap 3, before he too went down at Scarperia on Lap 5.

The front-runners remained close together but Dovizioso had the ascendancy, passing Iannone for third at the start of Lap 6 and then Rossi for second through the Arrabbiata complex on Lap 7.

Petrucci, meanwhile, had ridden his Pramac Ducati back into the top five and he became a factor for the podium when Rossi and Iannone began to make errors, perhaps losing grip.

Lorenzo got out to a one-second lead after Lap 9 and doubled that in the next seven laps, but Dovizioso looked good for at least runner-up and a Ducati Team one-two.

The marque’s hold on a podium sweep was waning, however, as Petrucci started to seriously battle on a worn front tyre.

Rossi and Iannone, the latter resurgent having also struggled himself in recent laps on the #29 Suzuki Ecstar entry, both passed in just a handful of corners on Lap 18.

As Lorenzo continue to take the race away from Dovizioso, Iannone dived under Rossi at San Donato on Lap 20 but couldn’t pull up in time.

The same happened again on the penultimate lap, two laps later, before Rossi in fact closed right up on Dovizioso on the final lap.

Bike #04 ultimately finished just 0.259s in front of the #46 Movistar Yamaha but that was enough to give Ducati a one-two on home soil, 12 months since Dovizioso himself became the first Italian to win for Ducati in the Italian Grand Prix.

Lorenzo suggested he had proven critics wrong as he won for the first time in his 24 starts for Ducati, in the fashion which became his trademark for Yamaha.

“A lot of people say that my method was not right and I said that I just needed to feel more comfortable, to save more energy,” said the Spaniard post-race.

“Finally, the team give me a new (redesigned) fuel tank that I feel more comfortable on.

“As I said before, Thursday and Friday, I could keep a more constant pace, and finally today nobody could catch me.

“I could win like I won and it’s like a dream to win here with a Ducati.”

Maverick Viñales was nowhere despite starting from the front row on his Movistar Yamaha, finishing eighth from Alvaro Bautista (Nieto Ducati) and Johann Zarco (Tech3 Yamaha).

Marquez remounted and actually continued to lap at a pace which would not have been uncompetitive but finished one position outside the points in 16th.

Miller was a DNF, missing the top 10 for the first time since he sat out last year’s Japanese MotoGP through injury.

Marquez’s championship lead is now 23 points as MotoGP heads to Catalunya for Round 7 on June 15-17.