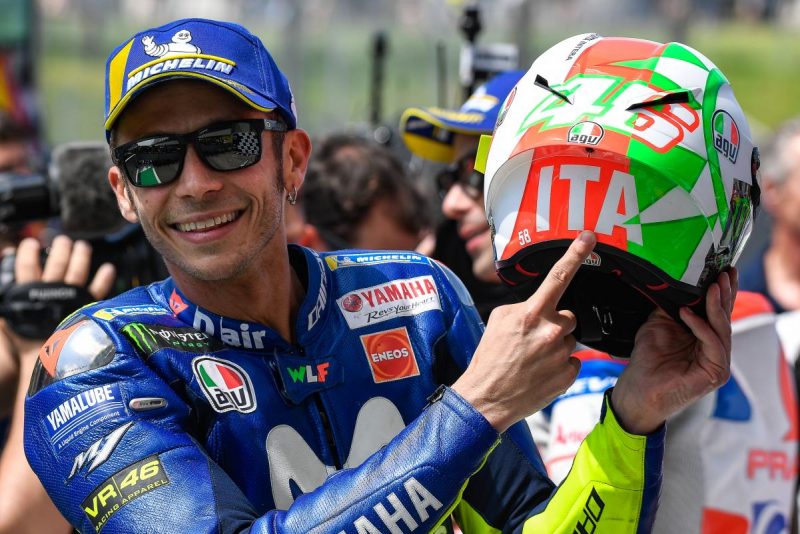 Valentino Rossi has taken pole position for the Italian MotoGP, his first since 2016, in a thrilling qualifying session.

Rossi had to break the outright lap record at Mugello to do so, taking the #46 Movistar Yamaha to pole for the first time in 27 MotoGP races (one of which he missed due to injury).

The Italian will file up alongside the Ducati Team’s Jorge Lorenzo and the other factory Yamaha of Maverick Viñales.

Andrea Iannone was fastest in the first runs with what was then a new track record on the #29 Suzuki Ecstar entry, thanks in part to an error from Marc Marquez.

Rossi, however, came out at the start of his second run and took more than a tenth off that benchmark as he set a 1:46.208s.

Lorenzo then threatened to upstage his former team-mate and put an Italian bike on pole but came up 0.035s short.

“It’s a great emotion, especially the lap after the pole,” said Rossi.

“I say ‘ciao’ to all the crowd, it’s fantastic.

“It’s great because also it’s a surprise because this year in the qualifying I always suffer but today the lap was great and I thought that it was enough for the front row but in the end it’s pole position.

“I think that tomorrow will be more difficult but for sure I enjoy the moment.”

Viñales went from sixth to third at the start of his second run but had to improve again to get back onto the front row, having start qualifying in the first 15-minute session.

Iannone didn’t go faster again but was good enough for fourth, one position ahead of Pramac Ducati’s Danilo Petrucci.

Marquez will join them on the second row after he twice couldn’t put a full lap together on his Repsol Honda.

The world champion twice messed up a lap in which he was fastest to the second sector, including in the final minute when he very nearly crashed Bike #93 at the last corner.

Miller also had to take the long route to Qualifying 2 after being bumped to 12th on combined times during Free Practice 3, in which he dropped Bike #43.

Dani Pedrosa was one of several to go down during Free Practice 4 and his afternoon didn’t get any better when he could only put his Repsol Honda 20th on the grid.

The sixth race of the season, of 23 laps distance, starts on Sunday night at 2200 AEST.