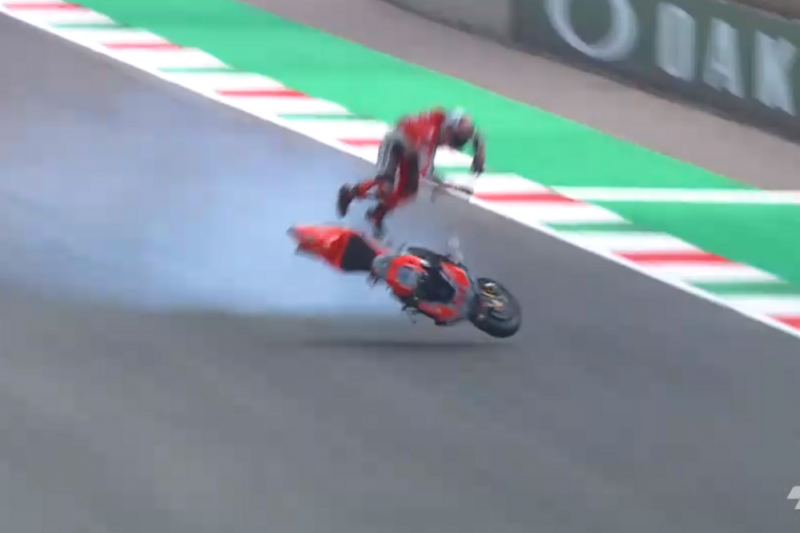 Michele Pirro is thrown from his Ducati pic: MotoGP.com

Michele Pirro has been diagnosed with concussion and a dislocated shoulder after a monumental crash during practice for the Italian MotoGP.

Pirro was flung high into the air at San Donato, at the end of Mugello’s long front straight, after the front wheel of his factory Ducati appeared to lock up.

The Italian lost consciousness upon impact, having gone off at a speed estimated upwards of 250km/h, before he and his bike came to rest in the gravel trap.

He had regained consciousness by the time he was airlifted to Ospedale Careggi in Florence.

According to a statement from Ducati, Pirro was “diagnosed with concussion and dislocated right shoulder, which was put back into place.”

Furthermore, scans demonstrated that there were “no further complications” for the 31-year-old wildcard.

As always in these cases, Pirro will remain in hospital overnight under observation, at least until tomorrow morning. #ForzaMichele #ItalianGP

Pirro posted on social media that “I played a joker today! A bit battered and bruised but I’m tough.”

The crash was not the only dramatic moment of Free Practice 2, with team-mate Andrea Dovizioso bringing about a second red flag when his GP18 blew an engine.

Andrea Iannone recorded the fastest lap of the day, a 1:46.735s, a day after confirming he will leave the factory Suzuki team at the end of the season.

There will be more practice this evening before qualifying commences at 2210 AEST.