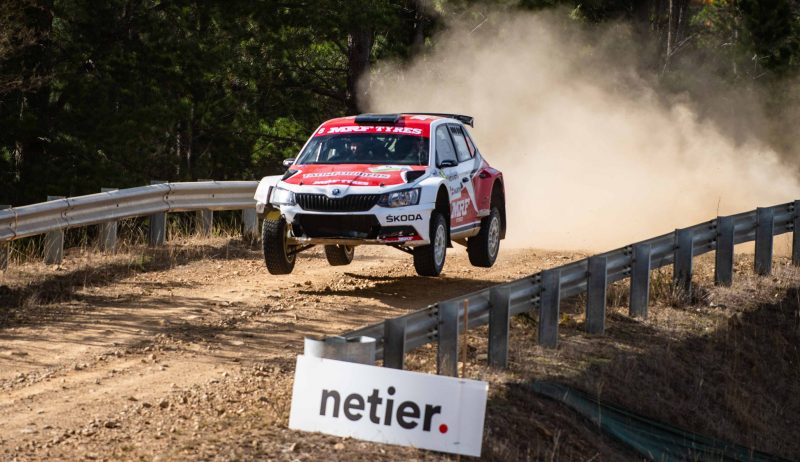 Eli Evans has continued his run of strong form in the CAMS Australian Rally Championship by amassing a 46 second lead in Leg 1 of the Netier National Capital Rally.

Tankformers’ Evans and co-driver Ben Searcy, who are again piloting a Skoda Fabia R5, led all day with six of the nine stage victories.

Harry Bates had taken out the other three stages in the Toyota Genuine Parts Toyota Yaris AP4.

However, his threat dissipated when the Yaris blew a turbo during Special Stage 8, costing three minutes there and leading to an extremely slow run in the final stage of the day.

Harry Bates now sits sixth in his home rally, nearly 10 minutes away from the lead.

“Today was really challenging, it was extremely rough, especially the second pass. On the last stage we knew Harry had had some issues so we tried to stay out of trouble but we seemed to create more, I think I hit every rock on the last stage.

“We managed to get through without any major dramas and finish on top for the day so mission accomplished.”

Molly Taylor is seventh in the Subaru do Motorsport Subaru WRX STI after she too had a trying day.

The 2016 champion bent rims and then damaged a cross-member late in the day as a result of contact with a gate post.

“We had a couple of broken rims today and had an incident catching another car – we hit a gate post on a tight corner and damaged the rear cross-member,” said Taylor.

“So it’s been a day to forget for us but Canberra is always really rough and tough on the crews and cars.

“The main thing is we got her back and she’ll be right as rain tomorrow morning.”

Taylor’s mother Coral’s day was even worse in her return as a co-driver.

Lewis Bates’ Toyota Corolla S2000, in which she was calling pace notes, is a retirement due to engine damage suffered when an oil line broke after a jump.

Coral Taylor, long-time navigator for Neal Bates, was calling pace notes for his son in the absence of Dale Moscatt, who is nursing an injury from a recent New Zealand Rally Championship event.

Round 3 of the ARC wraps up tomorrow with another six stages summing to 119km competitive kilometres.