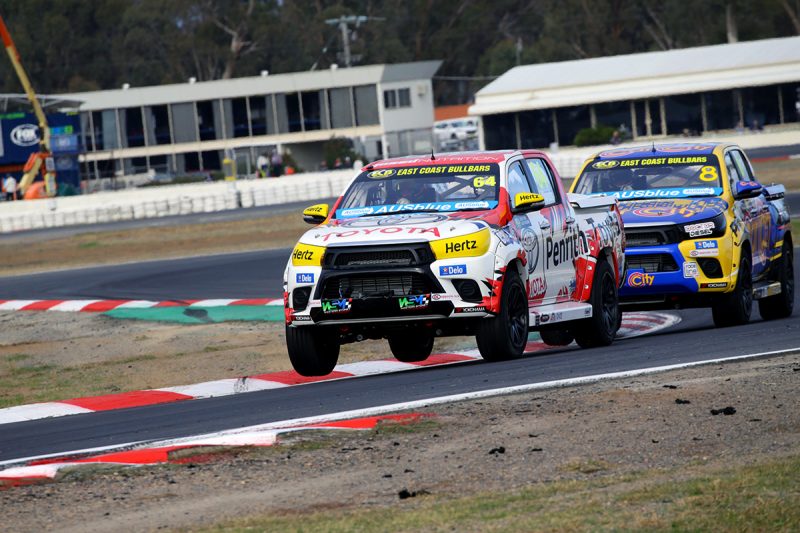 Craig Woods and Ben Walsh in Toyota Hiluxes at Winton

The Toyota Hilux will receive engine updates before the next round of the ECB SuperUtes Series in Townsville in a bid to improve driveability.

The Hilux was largely absent from the front of the field during Round 2 at Winton Motor Raceway, with Ben Walsh in the #8 Car City entry the lead qualifier of the three Toyota drivers in fifth.

Craig Woods finished highest in each race with results of sixth, third, and fifth, the best of those coming from a starting position of first by virtue of a partial reverse grid.

Ryal Harris in a Mazda BT-50 and Tom Alexander in a Holden Colorado have each won three of the six races to date, while the former’s Peters Motorsport team-mate Aaron Cameron was also highly competitive in the other Mazda at Winton.

Woods, on the other hand, experienced a significant drop off in performance from his trio of second place finishes in Adelaide, although still managing to retain the series lead.

The Tritons, in contrast to the Hiluxes, showed better pace at Winton than Adelaide, notwithstanding a turbo clamp failure and then overheating for Craig Dontas in Races 2 and 3 respectively.

Team owner Luke Sieders puts the swings in performance down to the gradual development of each of the six models in the series, with driveability the Hilux’s main weakness at present.

“The big thing is that each make is probably a little bit different in terms of stages of development at the moment,” Sieders told Speedcafe.com.

“I think the Colorado’s probably potentially the strongest on some points at the moment and that and the Mazda rolled out pretty well sorted and ready to go.

“As the Hilux and the Mitsubishi and so forth get their development upgrades to bridge the gap, they’ll get a bit of a seesaw effect.

“The Mitsubishi was pretty good at Winton, (and) we envisage that being pretty good as well at the rest of the rounds now that we’re on top of a few of its weaknesses.

“The Hilux has got a little bit of work to do; we’ve had a few driveability issues with the Hilux.

“On a street circuit, you get away with the driveability because you can be a little bit aggressive; a nice, smooth, flowing circuit like Winton, it’s pretty hard to mask up any driveability issue with that.”

Category engine builder Craig Hasted is working on the power delivery of the Toyota workhorse’s engine between Winton and the next round at Townsville.

“We’ve got some time booked in with Craig Hasted to get on top of that to make the Hilux a little bit more driveable off the corners,” Sieders advised.

“The Hilux is quite aggressive with its delivery of power, so you’ve pretty well got to be in a straight line to be able to feed the throttle with them at the moment.

“If we can fix that up then it’ll help its overall package immensely.”

The 11 SuperUtes had arrived at Winton with a suite of upgrades to address performance and reliability after issued experienced in Adelaide and a two-day test at Winton in April.

Lap times compared more favourably to those set in the last V8 Utes round at the Victorian circuit than they did in the South Australian capital (See tables below).