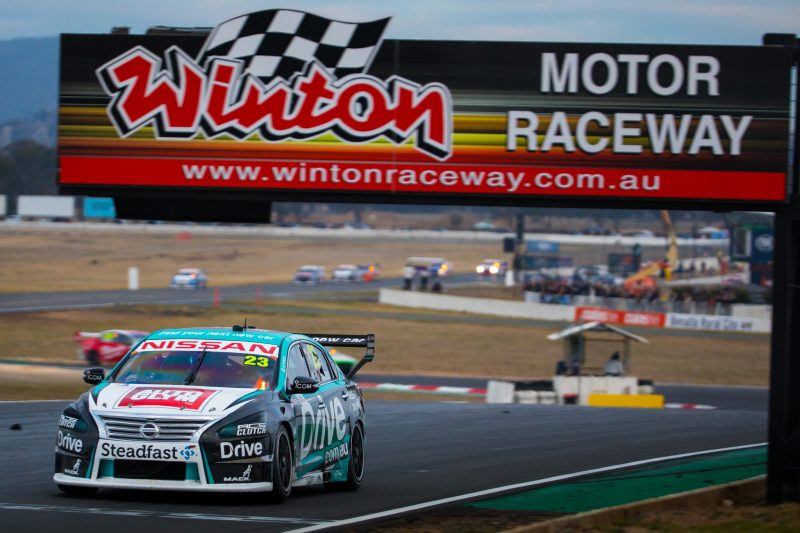 Michael Caruso is due to test at Winton next week pic: AJP Photography

Michael Caruso believes the form shown at Winton proved Nissan Motorsport’s pace is genuine as the squad prepares for a crucial test day next week.

The Braeside squad has undergone significant improvements this season which culminated in arguably its most complete weekend performance at the Winton SuperSprint earlier this month.

While team co-owner Rick Kelly grabbed the headlines by snapping a 210 race winless streak in the week that Nissan confirmed its exit, Caruso backed up the pace in the #23 Drive Altima.

The 35-year-old claimed second row starts for both races before following that with finishes of sixth and fifth.

Although the achievements arrived at the team’s test track, he is confident the upturn in form is not circuit specific but the result of a focussed development push.

“We think (our pace is genuine) but if we don’t go to Darwin and win or do the exact same, I don’t think it’s a complete disaster,” Caruso told Speedcafe.com.

“I’m sure even all the big teams are not going home and just wiping the cars down and waiting three weeks to go back out and race.

“You need to continue to work on it and try to improve everything that you would normally do in between events, so that’s the key and having the right direction.

“Where we’re at at the moment, we’ve got a good spot to continue working from, and having 50-odd people (Nissan Motorsport staff) in a good place mentally as well is obviously a big part of keeping that momentum going.

“I think if you look back the whole time, to have two cars running basically in that sort of contention the whole weekend, it’s the best we’ve done I think, for the whole existence of the team or Nissan.

“It is good and I guess the always very hard thing to do is to keep that going and obviously the sport is so competitive at the moment.”

Keen to celebrates its recent triumph, Nissan Motorsport is refusing to rest on its success as it looks to continue the development of the Altima during a test day at Winton next Tuesday.

The squad is set to share the track with Tickford Racing.

“There are a few things we’ve got to improve, no doubt about it, and really this is probably the most important test of the year,” Caruso, added in regard to the importance of the test.

“We have the first test at Eastern Creek where you’re just getting a handle on it all and there are things that you try, but this is ultimately the only test that you’re really going to start trying some things and seeing if we can find some more speed hopefully.

“This is basically the one opportunity away from a racing meeting that we’ll get to really throw the toolbox at it.”

Despite the news of Nissan’s impending departure from the sport at the end fo the year, Caruso says that heads in the team have not dropped but been rejuvenated by results on the track.

“It’s one thing to talk about how well you’re going and everybody thinks they’re doing the right thing all the time, said Caruso.

“They feel like they’re working towards improving, it doesn’t matter which team or how you’re going, so the Winton weekend is obviously a good indication to everybody that works here that we’re heading in the right direction.

After the Winton test Nissan Motorsport will head to Hidden Valley for the CrownBet Darwin Triple Crown from June 15-17.