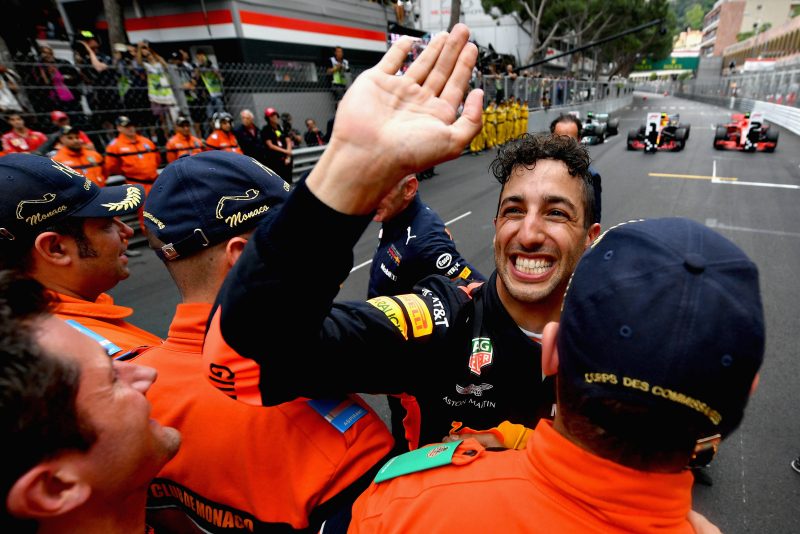 Daniel Ricciardo admitted he wanted to ‘close his eyes and cry’ after suffering a loss of power while leading the Monaco Formula 1 Grand Prix.

Having started from pole and leading the opening stages, an MGU-K failure robbed Ricciardo of a quarter of his Renault’s engine power and threatened to end his race before half distance.

It left the Australian battling a rear-guard action with a wounded car for much of the race, ultimately pulling off an astounding victory.

“The start went well and I was like, pretty much done the hard part, let’s just finish this race,” Ricciardo explained.

“Then, I think Lap 18 or something, I exited one corner and I just felt ‘burgh’, like pretty much no power compared to what I’m used to.

“I wanted to close my eyes and start crying because I thought that was it, the race was over.

“We changed a lot of things that didn’t fix the problem, we had to just survive with our problem all race.”

Success in Monaco comes two years after a potential victory slipped away after a blunder in the pit lane saw the team unprepared for a pit stop in 2016.

A dejected Ricciardo ended that race second to Lewis Hamilton, with this year’s result putting to rest the demons left from that event.

“Especially after ’16 got away, the lap I got the problem today all I was thinking of was ‘what the hell do I need to do to win this race?’,” Ricciardo said.

“I’ve done everything all weekend. I did everything in ’16, that’s why I just wanted to close my eyes, just go and hide in a corner.

“When Simon (Rennie, race engineer) said it’s not going to get better but it is what it is, I was like alright, well, maybe I can pull off a great victory and maybe the satisfaction will be even higher.”

On the pit wall, team boss Christian Horner admitted the team was considering retiring the car.

“They’re telling me on the intercom we’re going to have to retire the car in one or two laps, and I said look, we’re in the lead of the Monaco Grand Prix, we’re keeping going,” Horner told Sky Sports.

“He’s lost about 25 percent of the power of the engine, and then because of the way these engines work, that then puts all his braking, his rear brake temperatures are going through the roof.

“He’s having to lift off to do that. He’s got Sebastian Vettel breathing down his neck. He cannot make a mistake, he cannot lock a wheel up.

“And he’s dealing with all the switch change, all the stuff he’s got to manage and he totally nailed it. He was the coolest guy out there today.”

“It was a serious problem and he managed it unbelievably,” Marko told Sky Sports.

“I don’t think any other driver could have done it.

“At the beginning it looked like he slowed the car further down but when we settled it we changed set-up, he changed his driving style, so unbelievable.”

The result makes Ricciardo the third Australian to have won around the streets of Monaco, following Sir Jack Brabham (1959) and Mark Webber (2010 and 2012).

It also moves him into third in the drivers’ championship on 72 points, a score more than double that of team-mate Max Verstappen who ended the race ninth.