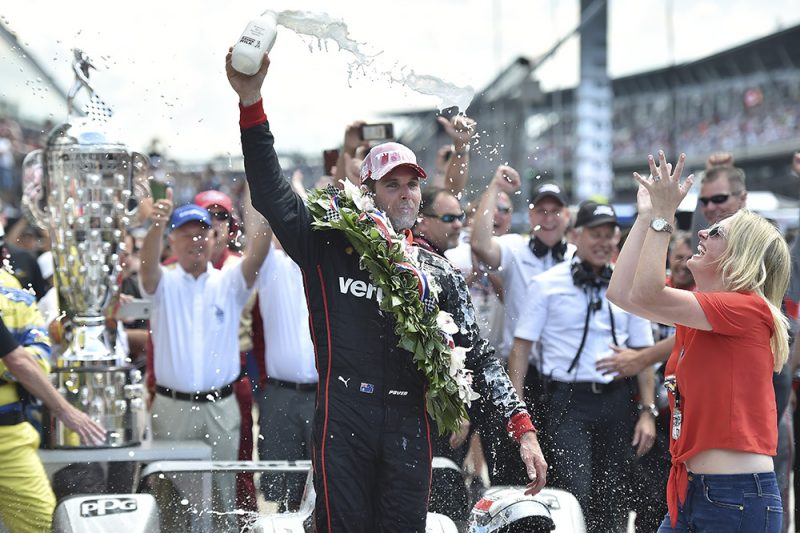 Will Power capped a historic day for Australian motorsport by winning the 102nd running of the Indianapolis 500.

Australian participation in the self-proclaimed ‘Greatest Spectacle In Racing’ dates to 1911 and the inaugural 500-mile event at the Indianapolis Motor Speedway.

That 2015 heartbreak when he was beaten to the line by his Penske Racing teammate Juan Pablo Montoya only strengthened Power’s resolve to win the motor race that dwarfs all others in America.

He ran fourth when the 200-lap contest restarted following a Caution with eight laps to go, then watched as the drivers ahead of them pitted when their fuel mileage gamble failed.

Power pulled away from pole winner Ed Carpenter over the last five laps to win by 3.16 seconds.

“This is a very special day in my career,” he told the appreciative crowd of 300,000 during a Victory Lap in the Chevrolet Corvette Pace Car.

“I came all the way from Toowomba and I never even expected to be a professional racecar driver.

“I can’t believe there are so many people cheering for me and I have to thank the fans, who are so incredibly passionate here, and everyone at Team Penske for giving me such a great car.

“We’re going to have an epic party tonight – it’s going to be big.”

Focused on the business at hand at Indianapolis, Power was unaware that Daniel Ricciardo had won the Monaco Grand Prix earlier in the day, setting up the potential for a historic Australian double.

Power delivered on his end of the deal by driving a clean and strategic race on a brutally hot day when eight of his competitors crashed out, including former ‘500’ champions Helio Castroneves and Tony Kanaan.

“To be the first Australian to win the Indy 500, that’s very special,” he told reporters.

“Maybe they might recognise me down there now… I don’t think many people know who I am down there, because we don’t have an IndyCar race there anymore.

Carpenter, who led 65 laps and enjoyed his most competitive Indianapolis 500 after starting from pole position for the third time, was one of many who paid tribute to Power.

He expressed his admiration for the way the Australian road racer adapted to oval racing when the Champ Car World Series was taken over by the IndyCar Series 10 years ago.

“I remember listening to him complain on the scanner, and I didn’t really like him much in 2008 because he hated this place,” said Carpenter, an oval track specialist whose extended family owns the Indianapolis Motor Speedway.

“Somewhere along the line, Will and I became friends somehow.

“You can ask him now, his favourite part of the schedule are the ovals.

“It’s bizarre, but we kind of bonded since I’m an oval guy and he likes to think of himself as an oval guy.

“He definitely has one up on me now but I’m really happy for him.

“I know how hard he worked to figure out how to be better on ovals, because he just flat out didn’t like them at first.

“He turned a weakness into a strength and he’ll make a great champion.”

Power confirmed Carpenter’s remarks about enjoying oval racing and admitted he struggled until breaking through for his first 500-mile race win at Auto Club Speedway (Fontana) in the 2013 season finale.

A year later, Power had the confidence to wrap up his first IndyCar Series championship on the Fontana oval after suffering three close defeats from 2010-12.

Since then, he posted oval wins at Pocono, Texas and Milwaukee, but victory at Indianapolis had eluded him in 10 previous starts.

This year, Power’s Month of May couldn’t have gone any better.

He claimed a comprehensive victory from pole position in the IndyCar Grand Prix on the IMS road course on May 12, then qualified on the outside of the front row for the big show on the oval.

On race day, he led 59 laps (second only to Carpenter’s 65) and stayed calm and cool on a scorching day.

After coming so close in 2015, he wondered if he would ever get another shot.

“I thought about that a lot, what I should have done, should I have changed this and that,” he reflected.

“Maybe it’s just not your day, it kind of worked out that like.

“That day I did everything, could do.

“Today I did it again, and it all worked out well.

“It was through speed, pit stops, in and out laps, good restarts.

“It was not an easy win.

“That makes it much more satisfying.

“It was the last box to ticked, to be considered as a very successful driver.

“But I’m not done… I still have plenty of time left to win more 500s and championships and races.”

Scott Dixon, who finished third Sunday, is the most successful active Indy car driver with 41 race wins, fourth on the all-time list behind only A.J. Foyt (67), Mario Andretti (52) and Michael Andretti.

Power now has 34 IndyCar race wins, and his 51 pole positions are tops among current drivers and bested only by Andretti (67) and Foyt (53).

“Huge congrats to Will,” Dixon said.

“I know he’s been very hungry for this and this is massive for him.”