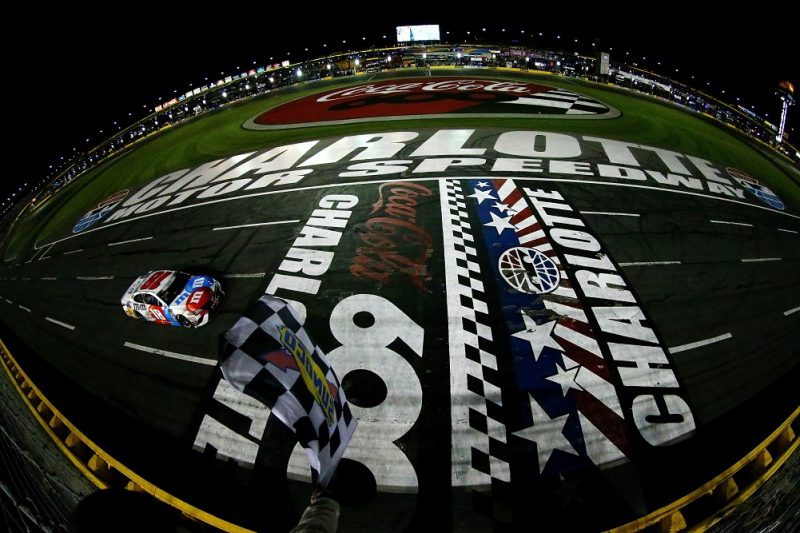 Kyle Busch has now won a points paying race on every current NASCAR circuit after a dominant victory in the Coca-Cola 600 in Charlotte.

The #18 Joe Gibbs Racing Toyota led at the end of each of the four stages, beating Martin Truex Jnr home by 3.823s while Denny Hamlin made for an all-Toyota top three.

Kyle Busch qualified on pole but it was Joey Logano (#22 Team Penske Ford) who took the initial lead.

That lasted only until Lap 5, when Kyle Busch got back in front and but for pit stops was not headed for the rest of the race.

He led all but 23 of the 400 laps to notch up a fourth win of the season, move ahead of Kevin Harvick on 25 play-off points, and extend his series lead.

Truex Jnr was thereabouts for much of the night before a pit lane speeding penalty put the #78 Furniture Row Racing Toyota to the back of the field for the start of Stage 3.

He still managed to finish the penultimate stage in eighth and got back to second with 70 laps remaining, before dropping back to fifth.

From there, the 2017 Monster Energy NASCAR Cup Series again mounted a recovery and got back to second on Lap 387.

Such was Kyle Busch’s form, however, Truex Jnr could only manage to be the best of the rest.

Hamlin was also prominent throughout the encounter, but still took the chequered flag nearly 10 seconds further behind in the #11 Joe Gibbs Racing Toyota.

Larson, too, had a lucky escape when he just glanced with wall with his right-rear corner but managed to otherwise stay off the walls and out of harm’s way.

Kevin Harvick, however, slapped the wall on Lap 83 after a tyre went down on the #4 Stewart-Haas Racing Ford and took no further part in the race.