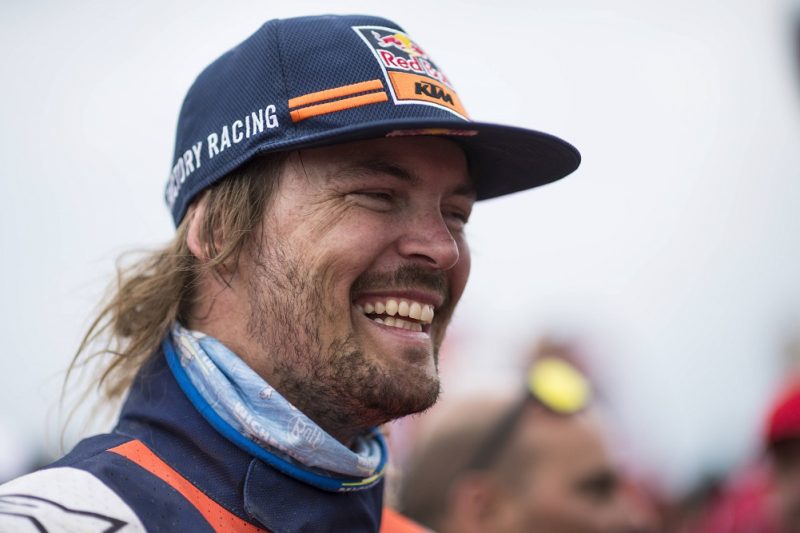 Toby Price is currently in Alice Springs to continue preparations for a dual Cars and Bikes campaign in next month’s Tatts Finke Desert Race.

Price fell just short of doing the Finke double at his first attempt in 2016, but had to revert to a Cars-only challenge last year due to a lengthy recovery from a broken leg in the preceding Dakar Rally.

Now all but over the break, the 30-year-old is again seeking to become the first competitor to take out both titles in the ‘there and back’ rally between Alice Springs and Aputula (Finke).

A five-time Finke winner on two wheels, Price says that the bike remains the priority but that the allure of a double is strong.

“I’m pumped, I seriously can’t wait to be on the bike out there,” Price told Speedcafe.com.

“We’ve got all that crazy logistical nightmare of helicopters and planes and stuff that gets me back to the start line, because I feel like the end of the day the main priority is the bike, that’s where it’s all at for me.

“I’m just trying to see if I can stretch the limit a little bit and try and get a double win out there and that’ll be something I think that will stay in the record books out there for a very long time if it all goes to plan and works.

“But you’ve got to have all the stars aligned and probably an extra 15 or 20 of them to jump in and line up as well, so we’re asking for a lot but hopefully we’ll get a good outcome out of it.”

The KTM is a revised model since his last attempt at Finke on a bike, which he is confident of coming to terms with having already spent time testing in Alice Springs before flying back to compete in the ECB SuperUtes Series at Winton last weekend.

“I had to sit out the bikes last year so that’s the biggest issue we kind of had, sitting out a year,” he explained.

“KTM went to a new frame, new chassis and stuff, so we don’t quite have the previous setting that we had two years ago.

“The first week (of testing) is just getting that Finke stretch on and getting everything in the right shape and the right position and we should be good.”

He also confirmed that there are no significant after-effects from breaking a leg in the 2017 Dakar, but that the relative sprint nature of Finke requires a different form of fitness.

“The leg is all good now, I have no pain or anything in my leg, (I’m) just basically getting the strength back and getting that bit of fitness back as well.

“Even though we did do Dakar at the start of the year it’s completely different fitnesses that you need between Dakar and what you do at Finke.

“Every race is different and you’ve got to handle things a bit different so we should be good.

“We’re looking forward to just swinging off the back of it and holding the top gear wide open and seeing if we get to the other end.”

Scrutineering for the 2018 Finke is scheduled for Friday June 8 before the prologue the following day.

The 226km journey out from Alice Springs to Finke takes place on Sunday June 10, and the return on the Queen’s Birthday public holiday the day after.