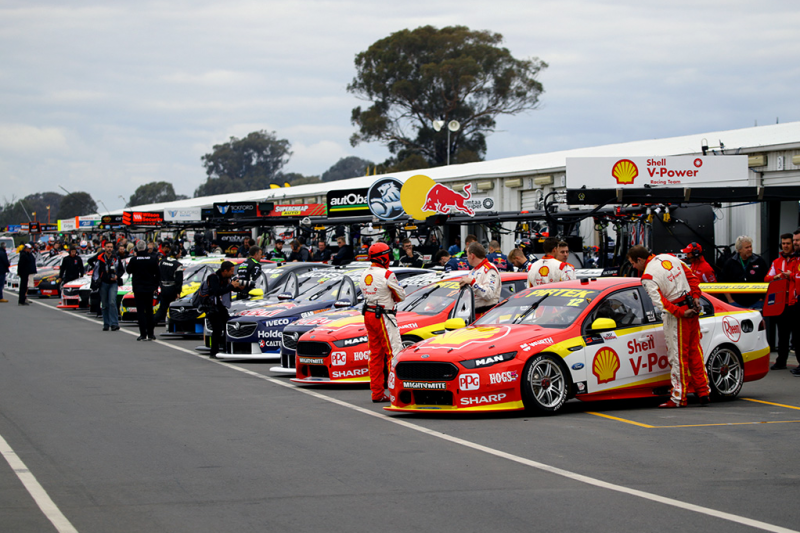 Queensland Supercars teams are pushing the category to amend its schedule for next season amid calls the current calendar is ‘bordering on being unsustainable.’

Teams located in the Sunshine State have faced hectic starts to seasons in recent years, undertaking long haul travel to six events located in South Australia, Victoria, Tasmania and Western Australia in the space of 11 weeks.

It has proved to be particularly tough on resources for the four operations in Queensland, with limited time between events to turn around cars before hitting the road to travel to the next round.

This month teams have completed an almost 9,000 km round trip to Perth before embarking upon a 1,500km drive to Winton with two days to spare in between the trips.

Triple Eight team manager Mark Dutton says changes need to be made to help the Queensland teams deal with the workload.

“It’s been incredible. The Queensland teams, and not just Triple Eight, for the Shell boys and girls, it’s been tough,” Dutton told Speedcafe.com.

“It’s bordering on unsustainable, the calendar right now, something needs to be done, as simple as that.

“It needs to be changed. You can’t go on like this, it’s just not fair on the crews, the staff of all the Queensland teams, not just Triple Eight.

“Hopefully, something can be done next year to improve the balance.”

Speedcafe.com has been told that Supercars is looking to address the scheduling issue for next year.

This could mean changes to the timing of events next year or potentially movement of rounds to even out the travelling requirements for teams based in Queensland and Victoria.

Traditional events such as the Adelaide 500 and the Formula 1 Australian Grand Prix are locked into their March dates, meaning if changes occurs they will likely centre around other meetings.

Shell V-Power Racing managing director Ryan Story understands the challenges faced by Supercars in setting the calendar, but is looking forward to the possibility of changes for next year.

“It has been incredibly challenging for us logistically for the last few years with such a tight turn around and the long haul events such as Perth,” Story told Speedcafe.com.

“When you go form Perth to Winton in a two week period it basically means you only have  a couple of days to turn around the cars in the workshop before having to get back on the road.

“It means you have expand your head count in terms of having guys that work in sub assembly who don’t travel.

“It also means that we have to have double up truckies. It does make it challenging.

“There has got to be a balance by ensuring that we have currency by racing regularly and not having any additional burden upon the teams to do that.

“We have obviously got race teams in Victoria and Queensland so there will be parts the year that advantage one over the other that is a natural thing.

“I think you have look at two things. You have to have that currency and you have to look at geography and where it makes the most sense.

“If you have got events that are somewhat local with a two to three week gap to another event that is somewhat local it means you get an extra two or three days in the workshop and it takes an enormous pressure off everything else.

“It is something that we have had a commitment from Supercars, that it is going to be addressed.”

Supercars CEO Sean Seamer told Speedcafe.com earlier this month that he plans to consult with media and teams when finalising the 2019 calendar.

“Everything is ongoing. We’ve committed to locking down the 2019 calendar by Q4 so looking to get that done a little bit earlier this year,” Seamer told Speedcafe.com.

“We’ll work with our partners, particularly media and team owners to figure out what the ideal calendar is based on fans and what sponsors and teams are looking to get out of the sport.”

The championship reconvenes at the CrownBet Darwin Triple Crown from June 15-17.