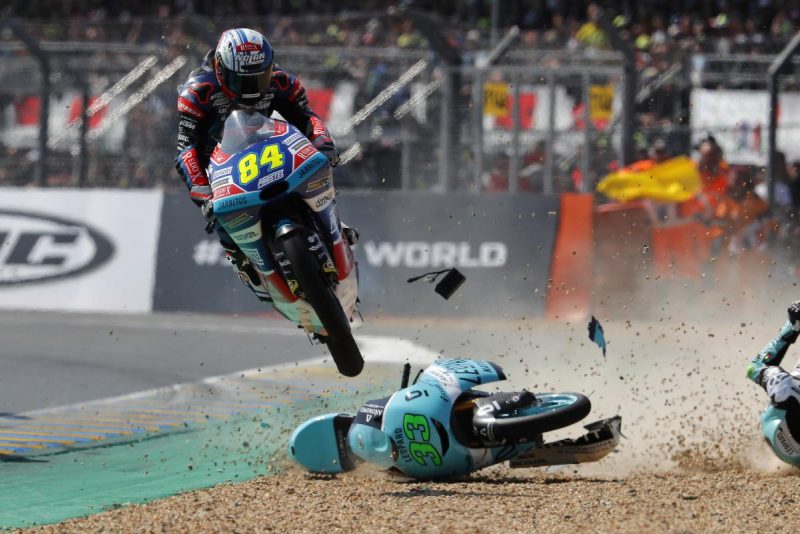 Jakub Kornfeil has likened his incredible save after launching off another rider’s Moto3 bike in France to motocross training.

Kornfeil had little time to react when Enea Bastianini went down in front of him at the end of the penultimate lap of the race at Le Mans.

The Czech rider launched off Bastianini’s Honda and somehow landed upright in the gravel trap.

Having been fifth at the time of the incident, Kornfeil temporarily dropped to eighth before taking his PruestelGP KTM to the chequered flag in sixth position. 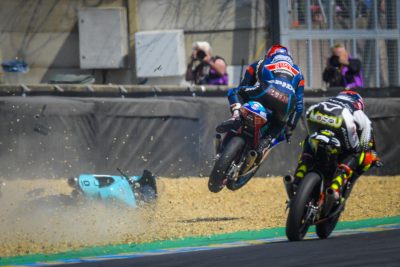 “I just saw the bike in front of me, so I could make the perfect jump and I just said ‘OK, that’s just like motocross training!’” Kornfeil told MotoGP.com.

“I just opened the gas, in the air, and tried to survive and stay on the bike.

“When I landed it was very soft, into the gravel. The problem was that when I was in the air, my airbag went off, and that made me a bit uncomfortable.

“I don’t know how I saved it! In my mind there was only one sentence, ‘keep the gas,’ because when you land in motocross always need to have the throttle. And that’s what I did!”

The airbag was not the only source of discomfort for the 25-year-old, who bettered his previous season-best result by one position despite the near-crash.

“After the finish line I opened my leather suit, I gave my chest protector to the marshals on the finish straight and tried to stretch a little bit,” he added

“The only problem was not my balls but my penis hurt a lot on the last lap.”

Albert Arenas won the race, his first victory on Moto3, after another would-be maiden winner Fabio Di Giannantonio had three seconds added to his race time for shortcutting a chicane during the race.

Sometimes, you just got to SEND IT! 🚀@JakubKornfeil84 goes BIG in the craziest save in #Moto3 history!#FrenchGP pic.twitter.com/VnSPFB7Jlf