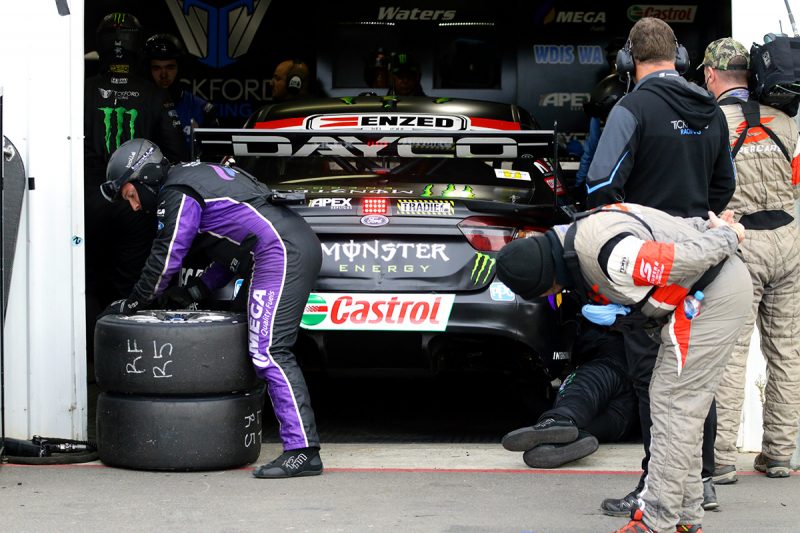 Cameron Waters was left rue an ‘embarrassing’ double axle failure in what proved to be a brutal weekend for the Tickford Racing driver at Winton.

Waters effectively missed the start of Race 14 after diving into the pits at the end of the formation lap having suffered a second axle failure in as many races.

The Monster Energy backed driver was forced to retire from Saturday’s 40 lap encounter after 28 laps due to a rear axle breakage.

The bizarre double failure left Waters dumbfounded why such an unusual failure should occur twice in a weekend.

“It was pretty embarrassing to be honest,” said Waters.

“We broke two axles in two days, and it shouldn’t really happen.

“We don’t really know how it happened or why they broke, but it shouldn’t happen so we’ll figure out the cause of the issue and make sure it doesn’t happen again.

“Once we got out there today my car was really fast, which was our only positive today.

“Even on 40-lap old tyres I was lapping better than guys on way younger tyres, but it doesn’t do us any good when we’re five laps down, so we’ll just have to take this one on the chin and move on.“

It proved to be a challenging weekend overall for the team having been unable to trouble the front runners in either of the two races.

Supercars rookie Richie Stanaway delivered the outfit’s best result of ninth in Race 14 which was the Kiwi’s season high following a difficult start to his maiden campaign.

Chaz Mostert finished 10th in Race 14 after coming home 14th in Saturday’s race while Mark Winterbottom returned results of 10th and 20th after an eventful weekend.

Tickford Racing boss Tim Edwards admitted his squad has plenty of work to do in the four week break until the CrownBet Darwin Triple Crown.

“We’ve certainly got plenty to figure out over the next few weeks, we’re obviously not where we need to be and we’ve got a lot of work to do to get there,” said Edwards.

The championship heads to the Northern Territory for Round 7 from June 15-17.