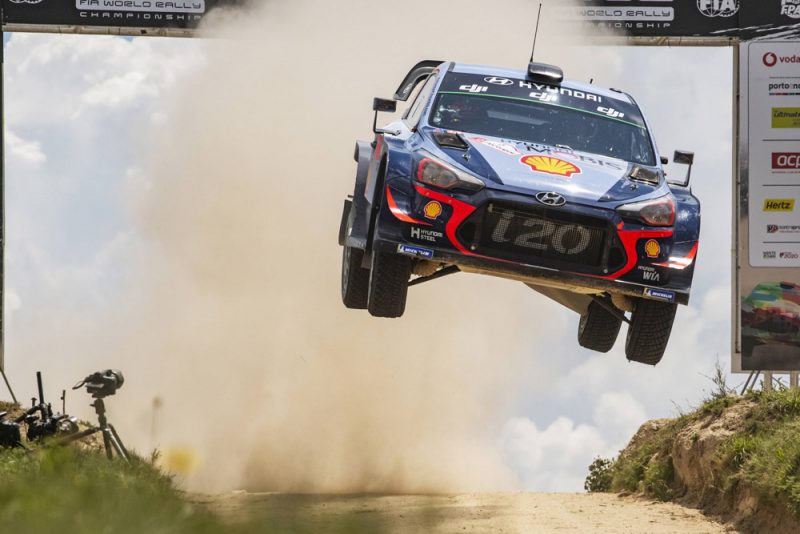 Thierry Neuville has moved into the lead of the World Rally Championship after claiming victory in Rally Portugal.

The Hyundai driver held a nearly 40 second advantage over Elfyn Evans heading into the final day, maintaining that gap throughout to take his second win of the season.

Sebastien Ogier was an early retirement from the rally, crashing out on Friday’s opening stage.

Leading the championship at the time, Ogier clipped a bank which forced his car off the road and into a wooded area.

Though neither Ogier nor co-driver Julien Ingrassia were injured, the duo went no further than the Viana do Castelo stage.

Kris Meeke and Hayden Paddon were also retirements, with both drivers being air-lifted to hospital for precautionary checks after separate crashes.

The rally’s opening morning was led by Hyundai’s Dani Sordo, though only after four different leaders in as many stages opened the event proper.

Ott Tanak headed proceedings following a super special stage on Thursday night, but his Toyota ingested a rock which forced him out with high oil pressure.

Jari-Matti Latvala was also a casualty on Friday, stopping his Toyota Yaris with damaged suspension.

Towards the end of the day the spate of retirements saw Neuville move into the head of the rally, an advantage he then held throughout.

Early leader Sordo was fourth in the final results, initially fifth behind Esapekka Lappi in the sole Toyota to reach the finish but a penalty for clipping a bale on Friday’s Stage 9 demoted him to fifth.

In championship terms, Neuville scored 29 points over the event courtesy of winning the rally and finishing second fastest on the power stage.

The Belgian holds a 19 point advantage over Ogier, who failed to score a point courtesy of his early retirement.