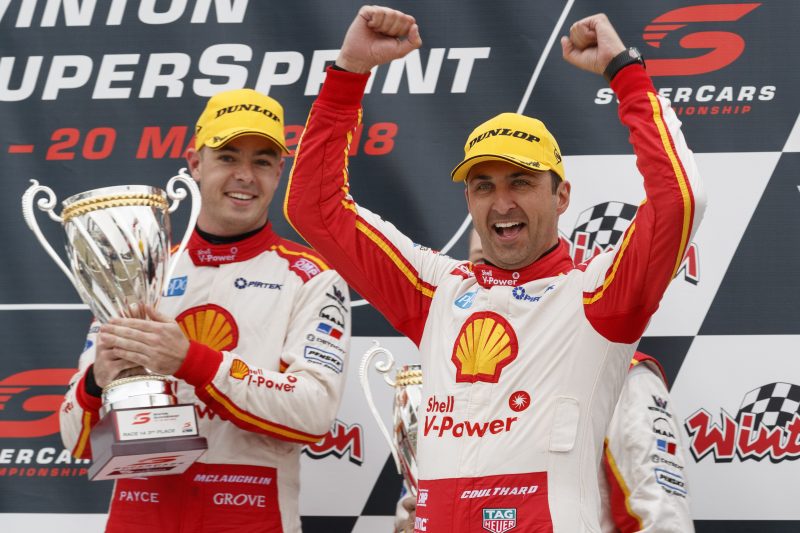 Fabian Coulthard hopes a drought breaking victory at Winton acts as a turning point in his season following a challenging start to the campaign.

The Shell V-Power Racing driver has been overshadowed by his team-mate Scott McLaughlin, who has romped to a healthy championship lead after scoring five race wins prior to the weekend’s Winton SuperSprint.

Success has been limited for Coulthard this year having visited the podium twice before producing a dominant drive to victory in Sunday’s Race 14 of the championship.

The win ended a drought stretching back to Sydney Motorsport Park last August.

Coulthard’s season has been punctuated by a series of unfortunate events, notably a wheel nut failure at Symmons Plains followed by a disqualification from a front row berth at Phillip Island due to a rear wing infringement.

The 35-year-old, who has been working with a new engineer in Mark Fenning this year, hopes the win will prove a catalyst for his own championship campaign.

“It’s all working very well, we’ve just not had very much luck this year, so hopefully this is the turning point,” said Coulthard.

“I’m seventh in the championship so lucky seventh.

“I feel like we’ve been fast enough at other events but we just haven’t had the luck.

“A couple of little things as a team we haven’t got right, and that’s just basically hurt us.

“We just need to do everything correct and I think lately we’ve been doing things well and it’s been a solid weekend for Car 12’s side of the garage.

“We just need to keep building on it and go to each new event and do the best we can and if our best is not good enough we need to make do.

“I’m looking forward to the year ahead. The more we work together with Mark and the rest of the team, Ludo (Lacroix, competition director), Scotty, the better it gets.”

Coulthard is 408 points behind championship leader McLaughlin, who arguably let slip opportunities to score a third perfect weekend in a row at Winton.

A mistake in the final laps Race 13 saw last year’s title runner-up drop back to fifth, while a poor start from pole position on Sunday dented his chances of victory, as he recovered from eighth to third.

“It was nice to continue my consistency in getting a fifth and a third this weekend and just build on it,” said McLaughlin.

“We know we’ve got a fast car under me and just keep going.”

The championship continues at the CrownBet Darwin Triple Crown from June 15-17.