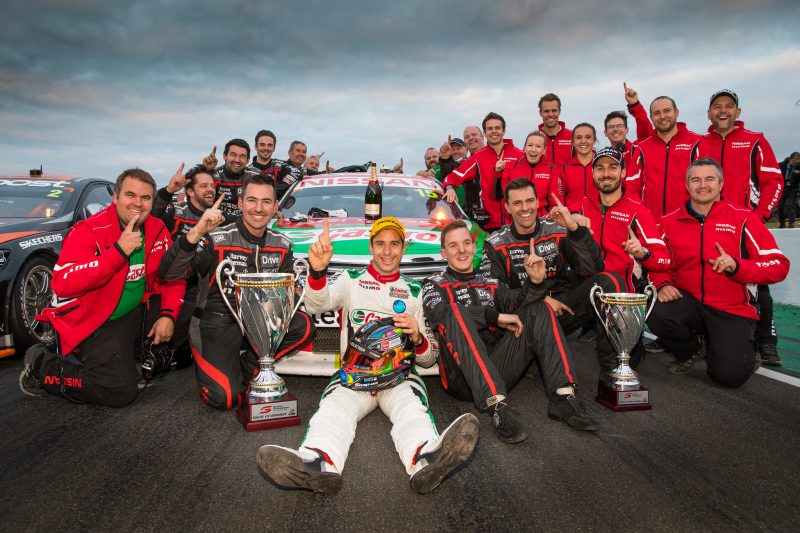 Todd Kelly believes his Nissan Motorsport team proved a point with victory at Winton but admits celebrations will be short-lived with the focus now on repeating the feat today.

Rick Kelly scored a deserved win for the Braeside operation which arrived just days after Nissan confirmed it will end its factory support of the team and exit Supercars.

The win sparked plenty of emotion from within the squad that have put in “countless” and “relentless hours” into turning the Altima into a regular podium and race contender.

Todd Kelly described yesterday’s triumph as better than winning Bathurst after what has been a dramatic week for the team following Nissan’s announcement.

While he felt the victory proved what his team can achieve, he says there is little time to soak up the moment.

The win, that follows a strong start to the 2018 season, was only the third for the Altima since it joined the championship in 2013.

“The emotions stopped about half an hour after the race, I started thinking about how we can do it again tomorrow (Sunday),” said Kelly.

“The guys did an amazing job, there’s only one person who needs to have made a mistake for that not to happen and the whole crew performed absolutely perfectly.

“They’ve all been through a hell of a lot over the last week, that’s a real testament to the group of people we’ve got and the calibre of them; they were absolutely spot on with everything they did.

“From Phillip Island we’ve got a good car and it’s a matter of getting the job done and there wasn’t really anything different that we did here, other than to prove that we could show people what we’re about and we can get the job done, particularly when things are difficult.

“I think the guys have (proved a point) for sure.

“The way Rick drove the car was outstanding, he was under huge pressure the whole race and the guys behind had a pretty good advantage tyre wise, so to have actually held onto that and kept calm and done the job he did in the car was unbelievable.”

Although focussed on seeing his squad continue to achieve, he admits the feat was among the team’s best since Kelly Racing’s inception in 2009.

The team has endured a challenging run particularly over the last five years in developing the Altima, which it will continue to field next year despite losing Nissan’s support.

“It’s right up there,” added Kelly.

“We’ve spent the last five and a half years putting countless hours of continuous effort in to try and get this package to the point where it could win races and be a podium contender.

“It’s just been relentless and it’s been up and down.

“There have been glimpses of hope that we’ve got ourselves a good car, so to now have a bit of momentum at a number of rounds where we’ve been up there, it’s a huge achievement and relief to have actually got through to the light at the end of the tunnel.”

Nissan Motorsport will return to the track this morning when Armor All Qualifying for Race 14 begins at 1025 local time/AEST.