Steve Johnson and Adam Bressington shared race wins in the final two hit-outs of the weekend for the Touring Car Masters at the Winton SuperSprint.

Johnson (Ford Mustang) led from start to finish in Race 3 to take a commanding victory, but drama struck John Bowe when his Holden Torana began smoking while running second on Lap 3.

It proved to be a power-steering issue, with Bowe ultimately dropping back to seventh at the chequered flag as Ryan Hansford (Holden Torana) and Bressington (Chevrolet Camaro) rounded out the top three.

Race 4 saw the need for an extra formation lap after Rob Burns (Holden Monaro) had problems on the grid, and more trouble unfolded when the race got underway proper.

Bruce Williams made contact with Bressington on the run down to Turn 1, causing the former broken steering and necessitating a Safety Car to recover his Holden Torana.

Upon restart, Johnson led away comfortably until the 2017 series winner made an error on cold tyres at Turn 12, dropping back to third as Bressington and Hansford moved ahead of him for the final tour.

Bowe then put pressure on Johnson but couldn’t find a way by.

Round 4 of the Touring Car Masters takes place at the CrownBet Darwin Triple Crown from June 15-17. Smith (Holden Commodore) led the early running from pole in Race 2 before Everingham (Ford Falcon) elbowed his way by to take the win and hold off a hard-charging Jordan Boys (Ford Falcon), who secured second after a late pass on Smith.

Battling a braking issue, Smith crossed the line third, from the Ford Falcons of Zak Best and Jon McCorkindale.

In Race 3, Boys once again found himself second behind race leader Smith, after a strong start for the former off the second row of the grid.

Trouble struck on Lap 5 though, with smoke pouring out from the rear of Boys’ car which forced him to pit and ultimately fail to finish.

That left Everingham second as he hooked onto the back of Smith for the lead, and despite applying pressure in the closing stages he could not find a way by the Gold Coast teenager.

Smith clinched the chequered flag less than a second ahead of Everingham, as Best rounded out the podium.

McCorkindale and Jacob Bell (Ford Falcon) completed the top five, with Smith picking up the round win.

V8 Touring Cars heads to Muscle Car Masters at Sydney Motorsport Park for Round 3 from June 8-10. 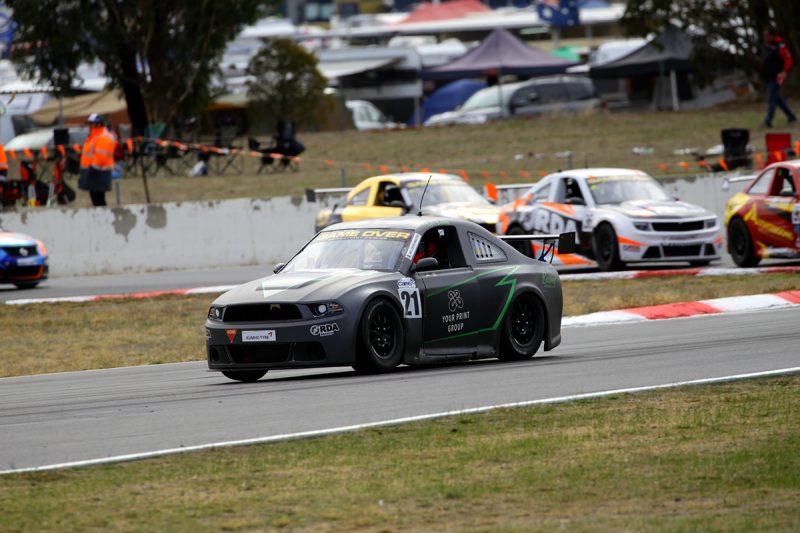 Justin Ruggier lost a race win and round win when he was taken out at a late restart in Race 4 of Aussie Racing Cars, handing the race to Kyle Ensbey.

Ensbey was in fact twice the beneficiary of negative events for Ruggier after a post-race penalty changed the outcome of Race 3.

Ruggier led much of the final race of the weekend after an early battle with Kel Treseder.

He had established a small margin over Treseder when the Safety Car was called after Emma Clarke stopped in the infield.

Ruggier looked set to take a clear lead to Turn 1, only for Joel Heinrich to lock up and clatter into the side of the Hertz-backed Western Sydney Motorsport entry.

Ensbey assumed the lead and ultimately win, from Blake Sciberras and Treseder.

Ruggier had taken the chequered flag in the lead in Race 3, but was issued a five-second penalty for starting outside his grid box, meaning what was a first race win in the series for Ensbey.

Treseder won the round for the third time this year and fifth in a row dating back to the Gold Coast last year.

The next round is a non-points affair supporting the CrownBet Darwin Triple Crown on June 15-17.