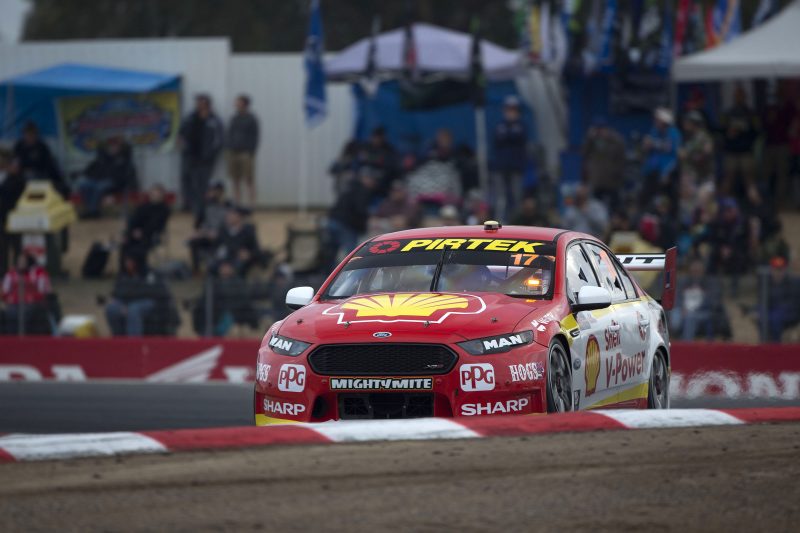 Scott McLaughlin claimed the Armor All pole position for Race 14 in an eventful session that saw Mark Winterbottom and Shane van Gisbergen collide, sparking a post-session investigation at the Winton SuperSprint.

McLaughlin again showed his qualifying prowess to clinch the 40th pole of his Supercars career with a 1:19.02s effort to beat team-mate Fabian Coulthard, as Shell V-Power Racing completed a front row lock out.

“It’s nice, always like to have a good stat. Great for the team, Shell V-Power Racing another front row lock out,” said McLaughlin.

“Hopefully I don’t balls it up like yesterday and we can have a good race.”

Tensions rose at the start of the session after a collision between Tickford Racing’s Winterbottom and Red Bull Holden Racing Team’s van Gisbergen on the out lap.

Reports suggest that the pair made contact coming out of the sweeper which resulted in punctures for the pair, right rear for van Gisbergen and left rear for Winterbottom.

Both teams disputed who was at fault for the clash with Triple Eight team manager Mark Dutton calling for Winterbottom to be excluded from the session.

“Everyone was going out and Winterbottom drilled the car. I don’t know why they’re letting him do qualifying; should be excluded,” said Dutton.

“The tyre was flat, so therefore we don’t know if it’s damaged the toes.

“You get grid positions if you slightly hold up a car, so drilling a car on the out lap…”

However, Tickford Racing boss Tim Edwards said his driver felt van Gisbergen was to blame for the incident.

Saturday’s race winner Rick Kelly showed Nissan’s pace is genuine as he secured third on the grid alongside his team-mate Michael Caruso.

Van Gisbergen managed to salvage seventh with a last gasp flyer that saw him rise from 22nd spot.

Winterbottom hauled his damaged car to 18th while Craig Lowndes will start a lowly 23rd.

David Reynolds suffered a steering problem which will see him start from last on the grid for Erebus Motorsport.

Results: Armor All Qualifying for Race 14