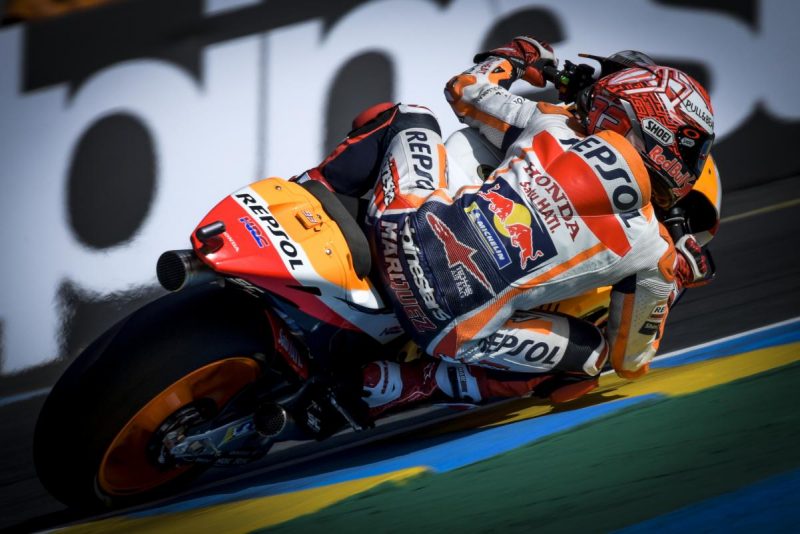 Marc Marquez holds a commanding championship lead after winning a French MotoGP in which front-runners Andrea Dovizioso and Johann Zarco both crashed.

Both the Spaniard’s nearest championship rival, Zarco, and the man who pushed him all the way to the final race of the 2017 season, Dovizioso, hit the deck before the eighth lap was over.

Marquez eased to victory ahead of Danilo Petrucci and Valentino Rossi, while Jack Miller took fourth.

Jorge Lorenzo made another brilliant start to vault from sixth on the grid into the lead ahead of Marc Marquez, who was also good off the line.

The #93 Repsol Honda was shuffled back through Turns 2 and 3, however, as Zarco took up second position.

Dovizioso made it a three-way battle for the lead on Lap 2 and passed Zarco when the pole-sitter ran wide at La Chapelle.

Marquez made a committed move past Zarco on Lap 7 but the Frenchman regained second position a few corners later.

Like Dovizioso, the Tech3 Yamaha rider’s gain was short-lived when he crashed out of his home grand prix at Garage Vert on Lap 8.

Lorenzo was forced to stand his Ducati up when Marquez fired down the inside at La Chapelle on Lap 10, and the Spaniard ceded another position to Petrucci on the next lap.

Petrucci initially went with Marquez but couldn’t match the world champion’s pace, the margin peaking at 2.8s at the start of the 27th and final lap.

The win was the 25-year-old’s third straight, and the 25-point haul takes him 36 clear at the top of the championship.

“I’m happy because this victory is important, at a circuit that normally we struggle,” said Marquez.

Petrucci took second on his current-spec Pramac Ducati, two positions ahead of team-mate Miller on a year-old version.

Miller maintained his starting position of seventh when the lights went out and initially gained positions when Dovizioso and Zarco went down.

The Queenslander then passed Lorenzo for fourth position on Lap 14, where he remained until the chequered flag, promoting him to sixth in the standings.

Splitting the Pramac Ducatis was Movistar Yamaha’s Valentino Rossi, who got by his former team-mate Lorenzo a lap earlier.

Dani Pedrosa (Repsol Honda) finished fifth, ahead of Lorenzo and Maverick Viñales (Movistar Yamaha), the latter of whom moves up to second on the table despite another uncompetitive showing.

Cal Crutchlow did take the start despite a major highside during qualifying and gradually rose to eighth by the end of the race, with the top 10 rounded out by Aleix Espargaro (Gresini Aprilia) and Alex Rins (Suzuki Ecstar).

The other Suzuki Ecstar entry of Andrea Iannone was one of six retirements, all for crashes, when the Italian went down on the opening lap.

Round 6 is the Italian MotoGP at Mugello on June 1-3.