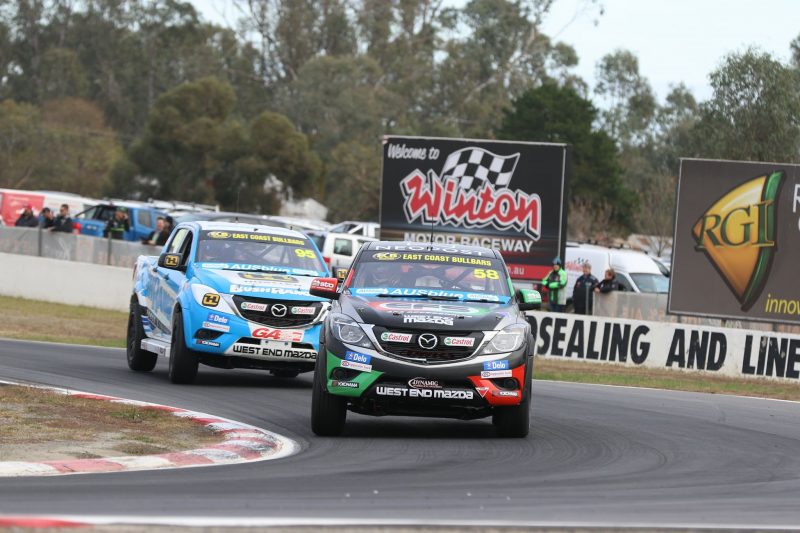 Ryal Harris has prevailed in a battle with team-mate Aaron Cameron to head a one-two for the Peters Motorsport Mazda BT-50s in Race 2 of SuperUtes at Winton.

Harris inherited first place when Tom Alexander served a drive-through, but was made to work for the victory after Cameron took over the lead for a couple of laps.

Craig Woods and Craig Dontas started on the front row and it was the former who seized the early advantage, while Dontas lost several places on the first lap after a forceful move from Harris at Turn 4.

With the pack tightly bunched, Alexander tipped Toby Price’s #87 Sieders Racing Team Mitsubishi Triton into a spin three corners later before he set off after the leaders.

Harris breezed past Dontas on the run to Turn 10 and the #45 SRT Triton soon peeled into pit lane having lost an intercooler hose.

Alexander passed Harris, who was in fact running with a flatspot incurred during the opening race to avoid a grid penalty for a tyre change, on Lap 2.

The Ross Stone Racing Holden Colorado, which won Race 1, moved out to a second-plus lead but it wasn’t to last as he had to tour the pit lane for the earlier driving infringement.

Cameron got by Harris for first position on Lap 6 but the three-time V8 Utes Series winner stuck with his team-mate and nipped up the inside at Turn 7 two laps later.

The Mazdas ran together to the finish as Harris held on for a 0.16s win after the nine laps.

Western Sydney Motorsport’s two Toyota Hiluxes of Craig Woods and Ben Walsh were each approximately another four seconds further back.

Young Tomas Gasperak kept a cleaner nose than most around him to bring the Team 18 Holden Colorado home in fifth while Price drove back up to sixth, ahead of Matt MacKelden (SRT Hilux) and Steve Wilson (Steve Wilson Racing Isuzu D-Max).

Alexander finished a quarter of a second behind in ninth and Christopher Formosa, who had an off after side-to-side contact with Price on Lap 5, rounded out the top 10 in a wounded Ranger Racing Ford Ranger.

Dontas, who was issued a post-race penalty after late contact with Harris which pushed him back one position to fifth in Race 1, was not classified as a finisher.

The final ECB SuperUtes Series race of the weekend is due at 1210 local time/AEST.