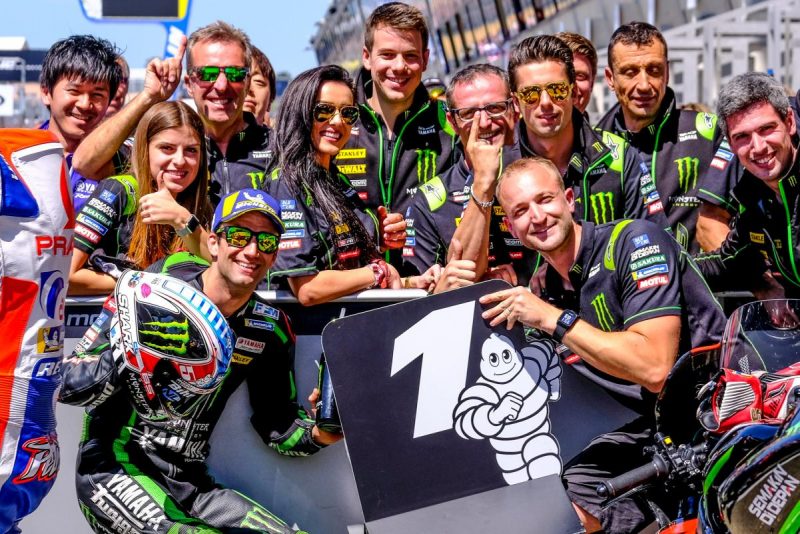 Johann Zarco will start from pole in his home MotoGP race after breaking the track record at Le Mans.

The Frenchman clocked a 1:31.185s which Marc Marquez could not match, and they will be joined on the front row by Danilo Petrucci.

Zarco was fastest after the first runs but was soon eclipsed by Jorge Lorenzo, who was in turn bumped off top spot by Marquez.

However, Zarco wrested provisional pole back from the Repsol Honda rider with a lap 0.130s quicker, and even though Marquez improved on his final flyer it was not enough.

The pole is the Tech3 Yamaha rider’s second of the season and fourth in his career.

Petrucci had come all the way from Qualifying 1 on his Pramac Ducati to make it three manufacturers on the front row.

Suzuki Ecstar’s Andrea Iannone will line up on Row 2 alongside the factory Ducati Team bikes of Lorenzo and Andrea Dovizioso.

Jack Miller heads up Row 3 on his Pramac Ducati, where he will be joined by Movistar Yamaha pair Maverick Viñales and Valentino Rossi.

Repsol Honda’s Dani Pedrosa got out of Q1 but progressed little further to round out the top 10, from Tito Rabat (Avintia Ducati) and Aleix Espargaro (Gresini Aprilia).

Cal Crutchlow qualified 13th but is in doubt for the grand prix itself after a massive highside on his LCR Honda.