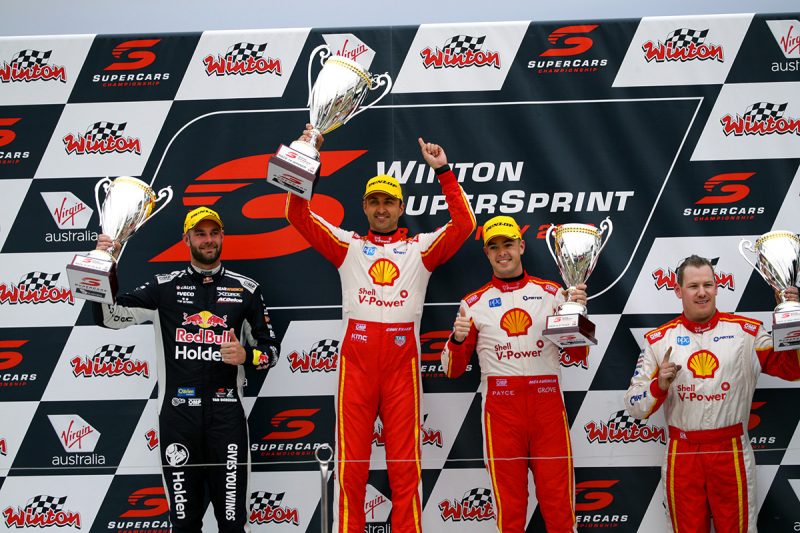 Fabian Coulthard described a milestone all New Zealand podium in Supercars as a ‘special’ moment following a dominant victory in Race 14.

Coulthard was unaware of the feat until van Gisbergen reminded him shortly after the race that saw the former end a winless run that stretched back to Sydney Motorsport Park in August 2017.

“I think it’s pretty special for all of us,” said Coulthard.

“Shane was the one who remembered. I knew we’d done a 1-2-3 in quali, but to have three Kiwis on the podium is pretty good for New Zealand.

“It’s just a small country and we produce so many great drivers.”

It was a view echoed by McLaughlin when asked what it meant to him to see his countrymen lockout the podium.

“I think it’s awesome. Shane was the one that said, Kiwi 1-2-3, but we completely forgot.”

The victory for Coulthard was a welcome return to form after a rough start to the season that yielded only two podiums until now.

A combination of misfortune has hampered the 35-year-old, notably a wheel nut failure at Symmons Plains followed by a disqualification from a front row berth at Phillip Island due to a rear wing infringement.

This year has also seen Coulthard partnered with a new race engineer in Mark Fenning, after the end of a partnership with Phil Keed which dated back to their time at Brad Jones Racing.

“It (the car) was on rails today. But, look, it all came down on the start.

“I got a good start, led into (Turn) 1 and then sort of maintained the advantage from there.

“It’s nice to have the confidence to be back here sitting in the number one spot.

“Good for everybody in our team (and) my relationship with my engineer, Mark Fenning’s new. I think it’s his first win in Supercars as well.

“It’s been a big milestone today and good to get back here.”

Coulthard has climbed to seventh in the championship following his 10th career Supercars win.