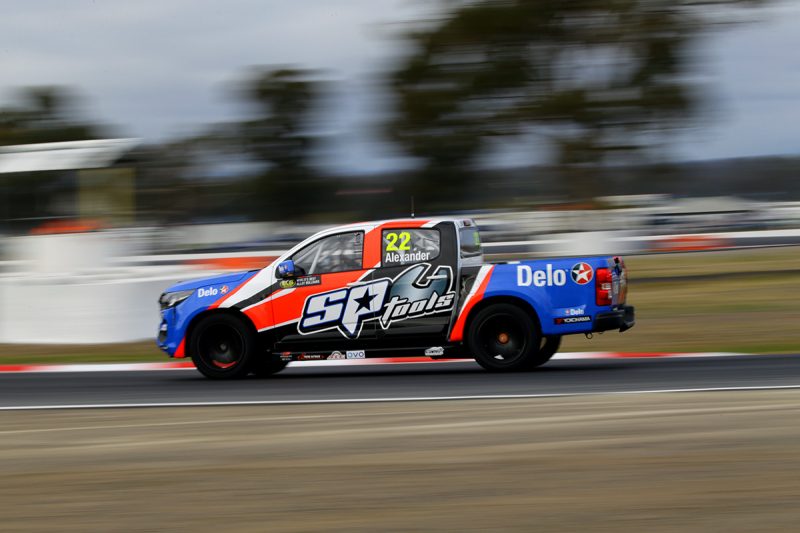 Ross Stone Racing’s Tom Alexander has notched up his second race win of the weekend and with that taken out Round 2 of the ECB SuperUtes Series at Winton.

Alexander led virtually all the way and finished a comfortable margin ahead of Ryal Harris, while Toby Price took third.

Aaron Cameron and Alexander shared the front row and it was the latter in the #22 Holden Colorado who took the lead around the outside of Turn 1.

Harris (Mazda BT-50) got up the inside of Peters Motorsport team-mate Cameron (Mazda BT-50) to move into second at the Turn 5 sweeper, as Alexander pulled clear.

The Kiwi’s advantage was three seconds after as many laps, while Cameron’s initial pressure on Harris faded as he was caught by Price (Sieders Racing Team Mitsubishi Triton).

Alexander and Harris traded quick laps as the margin slowly diminished, but never at a rate at which it looked like the leader might be threatened.

Having also won Race 1, Alexander took out the round overall while Harris closed to four points behind front-runner Craig Woods in the series standings.

Price got by Cameron on the main straight with three laps to go when the 18-year-old appeared to miss a gear, and they ran third and fourth to the chequered flag.

Craig Dontas was again a non-finisher after his SRT Triton overheated.